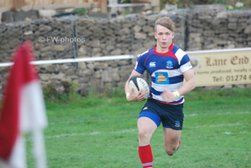 Sheffield appear in the 'Great Escape'

The trip to our friends at Cleckheaton have never proved to be easy and this contest was to prove no easier than previously. However, with the two poor performance against Billingham and Ilkley well behind them and a much more positive performance last week against Stockport, Sheffield travelled with victory very much in their minds and with Cleckheaton's poor standing in the league this was much reinforced. Sheffield remain without full back Andy Hodgson and hooker Sam Whitworth for Joe McHale to move from the wing to full back and for Carl Mortimer to keep the front row together for a fourth successive week. Jimmy Pearson moved from full back to fly half in the absence of Rob Conville and Gareth Morley moved from the bench to centre in place of the missing Joe Cribley and Ali Womack came in on the wing. Ben Whitney moved up from the second row to tight head prop with Dan Rylance moving to the bench and Dave Clayden coming into the second row. Having missed last week's match Alex Fawdry dropped to the bench for Connor Mitchell to retain the six shirt for a second week.

The match started well with Sheffield gaining an immediate penalty from the kick off, but it went rapidly down hill from there, with a series of knock-ons, penalties and a couple of kicks straight out. However, Sheffield had the first penalty attempt at goal after 8 minutes, but Jonny France somewhat fluffed his lines, with the ball going both below the bar and wide of the posts. Sheffield had an opportunity to score a try after 12 minutes, but managed to bring the wrath of the referee upon the team and opportunity was lost. Cleckheaton immediately worked their way back up field, were awarded a scrum five and scored in the corner through their right wing, Lee Queeley. Fly half Ronan Evans converted and the home side led by 7 points to nil. Sheffield appeared to struggle with the wet and blustery conditions and despite getting some good field position could not get through the very intense Cleckheaton defence. However, with 27 minutes gone, Sheffield wee awarded another penalty goal attempt. which Jonny France despatched to reduce the arrears to 7 points to 3. Just nine minutes later, a scrum to Sheffield close to their own line went amiss, the ball popping out the side, Josh Bird could not get hands on it and the Cleckheaton scrum half was able to capitalise, scoring wide out on the left. Luckily as things would prove, Ronan Evans attempted conversion was off target, but the home side led by nine points at 12 to 3 after 36 minutes. However, some incident off the ball saw Cleckheaton's Number 8 and captain sent to the sin bin and Sheffield being awarded a penalty at the restart. However, the first half concluded without any further score.

The second half saw Sheffield continuing to struggle with the conditions, with numerous knock-ons and poor kicks. However, with eleven minutes of the half gone Sheffield were awarded another kickable penalty, with Cleckheaton Loose head prop, finding himself on the way to the sin bin. Once again Jonny France converted to take the score to 12 to 6 in the home teams favour. Six minutes later, taking full advantage of the extra man, Sheffield broke free for full back Joe McHale to make a decisive incursion into the line to score wide out on the left. Jonny France knocked over the almost impossible conversion and Sheffield has what was an unlikely lead at 12 points to 13. Such slender leads are difficult to defend and the more so when your captain find himself on his way to the sin bin after 28 minutes of the half. So with just eight minutes of the match left, Cleckheaton managed to get a five metre scrum from which Number 8, Richard Piper scored their third try out on the right. Ronan Evans converted and it all looked a little bit bleak for Sheffield. However, Sheffield decided that loosing Dom to the bin and conceding the try would spur them on, and despite being a man light in the pack started to gain some domination at the scrums, which led to a number of penalties from the Cleckheaton pack and slowly but surely, Sheffield ploughed their way toward the Cleckheaton try line. Further penalties from the home team saw Sheffield camped on the Cleckheaton five metre line and Dom Parsons back on from the sin bin. More penalties ensued and the home side lost another player to the sin bin. Even more penalties resulted, but thankfully the referee refrained from yellow carding any of the home teams front row which would have resulted in uncontested scrums. Eventually the referee lost patience and as Jonny France went over to score the referee awarded a penalty try. Jonny France added the additional two points and we all headed for the bar with Sheffield having performed the great escape to win by 19 points to 20.