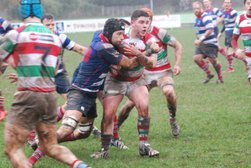 Sheffield mount a second half recovery to take the spoils, but not before Stockport give Sheffield a late scare.

Sheffield travelled to Stockport for their second away match in two weeks and following the disappointing draw with Ilkley last week. Stockport kicked off and had he better of the early period, winning kickable penalties on 9 and 14 minutes, but only managing to convert the second through their full back Platt-Hughes, to lead by 3 points to nil. Sheffield were back on even turns after just 4 minutes with a penalty of their own through full back Joe Cribley. The next 20 minutes saw neither side take control of the proceedings, but the last couple saw Stockport take complete control. Stockport were initially awarded a penalty, again converted by full back, Platt-Hughes to lead by 6 points to 3. However, from the restart Sheffield were all at sea and Stockport were immediately back in the ascendancy and managed to score a try through their left wing Myles Hall, which was then converted by Platt-Hughes, to lead by 13 points to 3 at half time.

However, the second half saw Sheffield come out with much more intensity, and took a firm hold of proceedings, which resulted in Sheffield being awarded a penalty try after a number of offence at the scrum in front of the posts. Joe Cribley converted and Sheffield were back in the match at 13 points to 10 after 46 minutes. Sheffield were back on the score sheet just 5 minutes later through a try by prop forward Dan Rylance. Joe Cribley added the conversion and Sheffield had the lead for the first time at 13 points to 13. Sheffield moved further ahead on sixty eight minutes with a try through replacement back row forward, Alex Fawdry. Joe Cribley converted again to move the lead to 13 points to 24. However, Stockport were far from out of the match and were in no mood to lie down and were right back into just 3 minutes later with a try and conversion to take the score to 20 points to 24. The remaining period of the match so neither side able to add to their tally of points and a relieved Sheffield ran out winners by 24 points to 20.