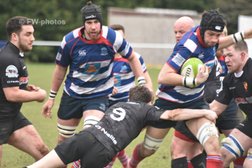 Sheffield Have to dig deep, very deep to secure this win over a very tough Birkenhead Park

Having a week off from playing as a team is not always a good idea and after a promising start Sheffield found themselves under some pressure from a very well drilled and organised pack, not to mention ay solid defence. Birkenhead showed their intention of playing as much rugby as possible through their pack, playing old fashioned ten man rugby and Sheffield's defence had to dig hard to repel the battering coming from their pack and a number of unnecessary penalties resulted, pushing Sheffield back into their own half. Birkenhead were given the opportunity to take the lead with a penalty inside Sheffield's 22 and just to the right of the posts on seven minutes, but fly half Dave Hall pulled the kick just past left post and Sheffield managed to stay on even terms. Sheffield slowly gathered their rhythm and some good tactical kicking from Andy Hodgson, Rob Conville and Joe Cribley started to push Birkenhead back into their own half. With twelve minutes gone Birkenhead lost their left wing Adam Wellington to injury as Sheffield increased the pressure and after good work out on the right, a break from Owen Smith brought to halt inside Birkenhead's 5 metre area and their second row was despatched to the sin bin for interfering at the breakdown. Two minutes later Andy Hodgson made a break out on the left, and managed to hand on to Ali Womack as he was tackled, for Ali to score just at the side of the posts. Joe Cribley converted and Sheffield had taken a 7 point to nil lead with seventeen minutes gone.

However, Sheffield did not help themselves with a number of unforced handling errors, a malfunctioning line out and a creaking scrum, handing possession to Birkenhead's pack and putting themselves under great pressure. The pressure eventually telling when Birkenhead managed to get over out on the left through their tight head prop and captain Matt Ibbotson. Dave Hall converted and the scores were tied at 7 all after thirty two minutes. Birkenhead continued to pile on the pressure through their pack, but Sheffield almost went ahead again in the dying moments of the half after a break out when Andy Hodgson intercepted Sheffield's 10 metre line and moved the ball to Joe Cribley and then on to Ali Womack, who chipped ahead, but unfortunately lost the foot race to the line and the referee decided we had run out of time.

The Birkenhead half time team talk obviously went down the line of "lets stick it up our jumpers and role on". Sheffield managed to get a scrum on their own 22 when Birkenhead knocked on, but Sheffield managed to loose the ball at the back of the scrum and were then adjudged to be off side at the breakdown. Dave Hall knocked over the penalty and Birkenhead's pack had delivered again to take them into the lead at 7 points to 10 after three minutes of the half. Birkenhead kept up the pressure and held on to their lead until the fifty sixth minute. Sheffield had just lost Tommy Marples to injury and with Tobi Amemakin already off injured, we went to uncontested scrums and Sheffield had to play the rest of the match with 14 men. Sheffield had a scrum, but knock on, Birkenhead decided to run it out through their pack but almost immediately were penalised for holding on. Andy Hodgson kick into the corner, Sheffield managed to win the line out and moved the ball left, Owen Smith ran off Andy Hodgson's left shoulder and crossed under the posts without a hand being laid on him. Joe Cribley added the conversion and Sheffield regained the lead at 14 points to 10 with 56 minutes gone.

Birkenhead kept up the forward pressure, but moving to uncontested scrums had taken much of the sting out of their attack and Sheffield created a number of opportunities through the back, but were still making far too many errors. With sixty eight minutes gone Sheffield had a line out on their own 22, which was dramatically over thrown when no one jumped for the ball, Birkenhead picked up the ball and trundled rapidly forward for Sheffield to give away another very kickable penalty. Dave Hall duly obliged and the Sheffield lead was reduced to one point at 14 points to 13 with 69 minutes gone. Sheffield at his point appeared to wake up and began to get much more into the Birkenhead half and twenty two. Birkenhead gave away a number of very kickable penalties which they turned down, presumably in the hope and desire to score two more tries and gain a bonus point. However, Birkenhead's defence had not gone to sleep and despite several close calls Sheffield were kept at bay. The referee called that their were three more minutes to play and minute later Sheffield had yet another penalty. On this occasion Joe Cribley was asked to take the kick, which he managed successfully to take the lead out to 17 points to 13. Sheffield managed to let Birkenhead get down to their 22 with a couple of errors, including dropping the restart and giving a penalty away in the process. Birkenhead kick to touch and must have fancied their chance of bullying their way over the line to secure the win. They won the line out and once again trundled forward, but not for the first time were adjudged to have been holding on at the breakdown. The referee called time and Andy Hodgson kicked directly to touch to end the match and a shaky 17 point to 13 win for Sheffield.