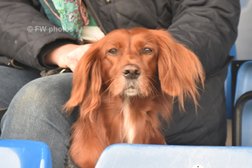 During the game at Lichfield last week we lost the services of Owen Smith to a shoulder injury which may keep him out for some weeks. Gareth Morley moved up from the bench into the centre and Jacob Strang came in on the bench for his first foray in the league with the 1st XV. Ryan Seabright returned to the team at blindside flanker in place of George Wagstaff and Jonny France came in off the bench at number 8, with Alex Fawdry dropping to the bench. Dan Rylance also started at tight head prop with Tobi Amemakin dropping down to the bench. Scrum half Steve Depledge was a late withdrawal, giving James Kearns his first 1st XV start in the league.

The match opened with both sides showing their ambition to play open rugby, but with a few too many errors to allow anyone any real advantage. However, Sheffield wee deemed to have erred at a breakdown on their 10 metre line and Longton's fly half, Lee Brogan converted with ease after 7 minutes. Sheffield came back strongly, but Longton's defence held firm. Longton had a line out just inside their 22 after a good kick from Andy Hodgson. Sheffield managed to turn the ball over and Rupert Broadley scampered through the Longton defence before handing on to number 8, Jonny France, who scored just to the right of the posts. Centre Harry Pratt added the conversion and Sheffield led by 7 points to 3 after 16 minutes. Sheffield were awarded a kickable penalty just two minutes later, but the attempt went agonisingly wide.

Longton, lost the services of their impressive centre, Alifereti Verimosoi with a leg injury after 25 minutes, but their intensity in both attack and defence did not appear to wane. However, once again Longton had a defensive line out in their 22 metre and having secured the ball kick out of defence. Sheffield secured the ball and unleashed an attack through the backs down the left side with full back Fergus Wood making a decisive break for Number 8, Jonny France to score his second try. Harry Pratt converted and Sheffield led by 14 points to 3 after 30 minutes. Shortly afterwards, Tommy Marples was substituted by Tobi Amemakin after taking a knock in a tackle. Sheffield than had their nightmare moment as several tackles were missed by several players and Longton came back into contention as right wing, Jack Newton-Taylor, went over on the left. Grant Hallam added the conversion and Sheffield's lead was reduces to 14 points to 10 after 35 minutes. Sheffield nightmare was however, not quite over as Longton's left wing Sam Evans broke out of defence and to score Longton's second try. Lee Brogan added the conversion and Longton had the lead at 14 points to 17 after 37 minutes. Sheffield, however, soon recovered their composure, as Longton knocked on at the restart. The ball fell into the hands of right wing Rupert Broadley, who showed a clean pair of heels to the Longton defence to score wide out on the right. Harry Pratt could not add the conversion, but Sheffield were back in the lead at 19 points to 17 with half time beckoning.

The second half saw Alex Fawdry replace Ryan Seabright in the back row, but then saw Seabright back on as Dave Clayden suffered an injury in an early clash. Longton kicked out of defence, but not very well and the ball fell to full back Fergus Wood, who broke through the defence to score wide out on the left. The conversion was not kicked, but Sheffield had made an immediate impact and now led by 24 points to 17 after just 2 minutes of the half. Longton lost their number 8 a few minutes later to injury and Sheffield looked much more in control of the proceedings. Sheffield had a penalty on half way and kicked to touch and from the resulting line out drove toward the Longton try line for number 8, Jonny France to score his third and Sheffield's fifth try. Harry Pratt added the conversion and Sheffield led by 31 points to 17 with 50 minutes played. Sheffield kept up the pressure and on 56 minutes, Rupert Broadley made a break before hading on the Fergus Wood who scored his second and Sheffield's sixth try. Harry Pratt converted again and the lead was out to 38 points to 17.

Two minutes later, Andy Hodgson made a break and opened up the Longton defence again. However, Sheffield somehow managed to butcher the opportunity, to give Longton a scrum on their five metre line. Longton decided to run the ball out of defence and for the second time their left wing Sam Evans left the Sheffield defence floundering to score wide out on the left. Grant Hallam missed the conversion and the arrears were reduced to 38 points to 22 with 60 minutes gone. Tommy Marples replaced Dan Rylance in the front row and Sheffield turned the ball over almost straight after the kick off and Jonny France broke free to score his fourth try. Harry Pratt added the conversion and with 62 minutes gone, Sheffield led by 45 points to 22. Three minutes later, Sheffield were able to charge down a defensive kick from Longton's fly half and Tom Womack following up scored the eighth Sheffield try, again out on the left. The conversion was missed, but Sheffield led by 50 points to 22. Jacob Strang came on for Ali Womack on the wing and one might have thought that the game might peter out at this point, but the last hooray was to go to Longton, and once again it was to be effectively from their own line again. With the referee about to call a halt to proceedings, Sheffield turned the ball over just short of the Longton try line and Longton predictably, gave it to winger Sam Evans, who broke out from the Longton five metre to score his third try at the other end. Grant Hallam added the conversion and the match concluded with Sheffield winning by 50 points to 29 and with both sides gaining a 4 try bonus point.