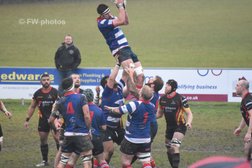 Sheffield loose their way in the final quarter

Sheffield came to this match without back row forwards Alex Fawdry and Jonny France, together with prop forward Tobi Amemakin. They were replaced by Ryan Seabright, George Wagstaff and Lewis McKaye. Steve Depledge also returned to the team after injury.

Sheffield started confidently and were duly rewarded when scrum half Steve Depledge went over out on the left following a line out close in. Depledge added the conversion and Sheffield had the early lead at 7 points to nil. Sheffield continued to play well and dominate the exchanges, but a number of opportunities to score went begging and the score remained unchanged. However, as time elapsed Birmingham Solihull began to gain in confidence and adopted a strategy of forward power which resulted in a try to their blindside flanker Andrew Scriven out on the left. Fly half Jack Jolly added the conversion an the scores were tied at 7 points all with 26 minutes gone. Birmingham continued to press through their pack and were rewarded again on 35 minutes with a penalty which was converted by Jolly to take Birmingham in to the lead at 10 points to 7, which is how the half finished.

The second half saw Birmingham come out with the same intent as they had finished the first half with their pack making the running, and keeping Sheffield on the back foot, resulting in a score under the posts for their open side flanker Michael Stephens. Jolly converted and Birmingham's lead was out to 17 points to 7 after just three minutes of the half. Sheffield rallied and just four minutes later Sheffield fly half Andy Hodgson showed the way to the try line and with Steve Depledge converting the arrears were back to three points at 17 points to 14. The score board was not troubled again until the 60th minute when the third man in the Birmingham back row, number 8 Danny Wright scored when Birmingham pushed over from a scrum. Jolly converted again and the lead was out to 24 points to 14. Sheffield battled hard to get back into the match, but the Birmingham defence remained firm and with Sheffield trying to break out of their own half in the dying minutes of the game, an attempted pass out wide was picked off by the Birmingham 8 Danny Wright for him to score his second try. Jolly converted and at 31 points to 14 the match was effectively dead.