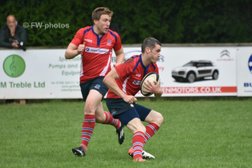 Sheffield overcome a slow start to record a solid win.

The new season sees Sheffield playing in National 3 Midlands after transferring from the North during the summer break; as usual we began our season with a game away from home with Collegiate Cricket still in occupation of our pitches. Sheffield have had a good pre-season with a win away to Sandal who now play in National 3 North after relegation from National League 2 North, and a narrow loss 17 to 15 against Harrogate from National League 2 North. The game away to Bridgnorth was therefore, something of an unknown quantity. Bridgnorth were promoted from Midlands West 1 and therefore, this was new territory for both teams. Sheffield arrived at Bridgnorth later than planned after being caught up in an accident on route and some unexpected roadworks which left us with little time to prepare for the match.

Inevitably Sheffield made a low start to the match and an abnormal number of knock-ons and turnovers were peppered throughout the whole of the first half, meaning that Sheffield starved themselves of any really useful possession and that they had to defend for exceptional periods of time. However, the Sheffield defence remained steadfast and Bridgnorth rarely came close to breaching the try line. Bridgnorth took a 3 to nil lead after 17 minutes following a penalty at a scrum which had come from a Sheffield knock-on. The points being converted by Bridgnorth's full back, Will Biddell. Sheffield's lack of ability too hang on to the ball continued and only late in the half did Sheffield get a foot hold. Bridgnorth missed a kick at goal from a penalty on 34 minutes, which hit the left goal post and from which Sheffield were able to break out resulting in a penalty close to Bridgnorth's 22 metre line. Joe Cribley converted to level the scores at 3 points all, which is how the half finished.

Sheffield came out in the second half looking much more confident and after Bridgnorth made a few unforced errors, Sheffield were given a second opportunity to increase their score, which Joe Cribley duly did to move the score to 3 points to 6 in Sheffield's favour after just 43 minutes. Three minutes later Bridgnorth had a further opportunity to add a further penalty, but again the opportunity went begging when the cross bar was struck. Sheffield were given a further to add to there score with 51 minutes gone. The kick was from the half way line and taken by outside centre, Harry Platt, but came up short. At this point in time Bridgnorth suffered a mental melt down when they initially attempted to run out of defence then change their minds after a good chase from Sheffield. The ball was passed back behind the try line and instead of licking to touch was grounded handing Sheffield a 5-metre scrum. Jonny France picked up at 8 and handed on to scrum half Steve Depledge who passed to wing Rupert Broadley who powered over in the corner. Joe Cribley failed with the conversion, but Sheffield led by 11 points to 3 after 53 minutes. Sheffield added to the lead 4 minutes later with further penalty from Joe Cribley. Bridgnorth lifted their game and were putting additional pressure on the Sheffield defence and were rewarded with a penalty in front of the post on 65 minutes. Will Biddell converted and the lead was reduced to 6 points to 14. Bridgnorth continued to pressure the Sheffield defence, but Sheffield held firm and repulsed all their efforts to get over our line and the match finished without further score by either team.