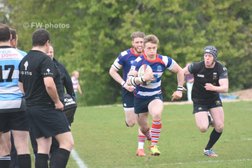 In an extremely tough and combative match Sheffield hold on through exceptional defence to take the spoils and book a place in the League Play-off.

Sheffield saw the more than welcome return of Flank forward Alex Fawdry and Prop forward Tobi Ademakin to boost a team already playing quite well, but still no Dave Clayden in the second row. Both Danny Williams and jack Hedley retained their places in the squad, but with Danny making the staring line up and jack moving to the bench. And finally, with the enforced absence of full back Fergus Wood, everyone was delighted to see the return, of the supposedly retired, Joe Cribley.

This was never going to be an easy encounter. Bridgnorth had won their last six matches, beating Lichfield, Nuneaton and Peterborough Lions at home, and Longton, Old Halesonians and Sandbach on the road, and when played at Bridgnorth at the very beginning of the season were no push over with Sheffield only coming away with 4 points from a 14 point to 6 win.

The match opened very competitively with Bridgnorth showing their intention to play rugby and if at all possible, stop Sheffield's party in its tracks. However, Sheffield were to make the early breakthrough when after two penalties had given Sheffield on the Bridgnorth 5 metre line. Sheffield secured the ball and drove for the line, but it was scrum half Steve Depledge who sneaked over the line under the defence to score out on the 15 metre line. Andy Hodgson missed the conversion, but the lead was 5 points to nil after just 9 minutes. Sheffield had a further opportunity to add to the lead 4 minutes later with a penalty just 25 metres out and in front, but again Andy Hodgson's radar was well adrift. Bridgnorth battled hard and only some exceptional defending was keeping their attack at bay. However, Sheffield were penalised after 2 8 minutes for a high tackle and Bridgnorth wing Jack Lowe converted to reduce the lead to 5 points to 3.

However, as is often the case, concentration can slip after a score and so it was for Bridgnorth. Sheffield kicked off, Bridgnorth coughed the ball up and Sheffield were on the attack with left wing Owen Smith barging his way over the line wide out on the right. The conversion was once again unsuccessful, but Sheffield led by 10 points to 3 after just 30 minutes. Bridgnorth appeared to have retreated into their shell and Sheffield were soon on the attack again and following a penalty for a high tackle, Sheffield were taking a line out just 5 metres out again. With the ball secured, Sheffield once more went for the drive, and once again it was scrum half Stave Depledge who popped through a nonexistent hole to score the 3rd try. Joe Cribley now had the kicking duties, and dutifully obliged with Sheffield's first points from the boot to take the score to 17 points to 3 after 34 minutes, which id how the half finished.

The second half saw Bridgnorth refocused and the battle raged hard and Sheffield were hard pressed to keep the visitors at bay, with Bridgnorth showing just why the have been so successful in the last quarter of the season. Sheffield will count themselves very lucky not to concede at least one try in the first 15 minutes, but sometimes lady luck shines on you. With Bridgnorth battering on the Sheffield line it looked inevitable that Bridgnorth would score, but as they went over for the score, replacement Jack Hedley stripped the Bridgnorth player, literally on the line and broke away. He made ground to the 22 before passing on to full back Joe Cribley, who in turn handed on to centre Rupert Broadley who turned on the afterburners to scoot down the left side to score at the other end unopposed. Joe Cribley added the conversion and Sheffield had an unlikely, but welcomed lead of 24 points to 3 after 56 minutes. Bridgnorth continued to battle hard, but luck was not with them and Sheffield had put in by far their best defensive performance of the season to see off the challenge and record a 4 try, 5 point victory to secure second spot in the league and a play off on Saturday, 29th April away at Rossendale, who were runners up to Huddersfield in the Northern League.