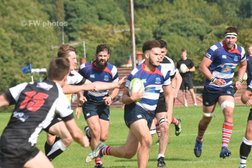 Sheffield just let it get away from them at the death.

The new season saw Sheffield set out on yet another new adventure. We were promoted from Yorkshire One to North One East at the end of the 2010-11 season when we defeated Darlington, at Darlington in a second place play-off by 17 points to 18. Then we were promoted again at the end of the 2014-15 season from North One East to National 3 North through a play off away to Kirkby Lonsdale by 29 points to 35. At the end of last season we once again gained promotion through a play off away from home, this time at Rossendale, on this occasion by 31 points to 32.

The adventure started with a home match to Luctonians. Sheffield had lost a number of players over the summer, most notable being Alex Fawdry (away to Australia for a year or so?), Joe Cribley (retired) and Owen Smith leaving University to join the RAF. However, the squad has also been augmented with new recruits, 6 of whom were in the match day squad. Gareth (Gaz) Burns (Back row), Jamie Pearson (Centre), Lewis Bowman (wing three-quarter) Ianto Jones, (Hooker), Matthew Palphreyman, (Back row) and Dale Hobson (Prop forward).

Sheffield started well and soon had a score on the board with a try through Fergus Wood from a neat kick through by Andy Hodgson. Unfortunately Steve Depledge could not oblige with the conversion, but Sheffield led by 5 to nil after 3 minutes. However, Luctonians came straight back and after some hard work from their pack, second row Laurence Breese went over near the posts. Scrum half Louis Silver converted and Luctonians led by 5 points to 7 after 7 minutes. Sheffield retook the lead just 3 minutes later with a try through centre Jamie Pearson. Steve Depledge added the conversion and Sheffield led by 12 points to 7. Sheffield looked comfortable and just five minutes later struck again, this time with right wing Rupert Broadley showing everyone s clean pair of heels to score out on the right. Steve Depledge added the conversion again and Sheffield led by 19 points to 7 after 15 minutes. Sheffield did not appear to be under any specific threat until Luctonians got a lucky break when Fergus wood forgot about the change in the law interpretation and was deemed to have carried the ball over his own try line and Luctonians had a 5 metre scrum. Luctonians took full advantage of the position on the pitch and once again their pack showed its strength which resulted in them being awarded a penalty try and Sheffield prop Tommy Marples getting a ten minute rest in the sin bin, and Luctonians reducing the margin of Sheffield's lead to 19 points to 14 after 25 minutes.

Luctonians had a further opportunity to reduce the deficit further with a penalty on 29 minutes, but the kick from Louis Silver went wide. With their tails up Luctonians went hunting for more and were duly rewarded just three minutes later when their captain and number 8 Piers Morell went over for a try which went unconverted, but the scores were tied at 19 points all. Sheffield got back on track, but were unable to break down Luctonians defence until just before half time. However, Sheffield broke down the right side and left everyone in his wake again to score just out on the right. Steve Depledge could not add the conversion, but Sheffield had restored their lead on the stroke of half time at 24 points to 19.

The second half saw Sheffield having to defend their line again and after 46 minutes they were caught off side on their 22 metre line. Luctonians Louis Silver converted and the lead was reduced once more with Sheffield lead down to 24 points to 22. Neither team had any dominance over the next period of play, but with the match running toward the fourth quarter, Sheffield were awarded a free kick, they went for tap and go, followed by a kick up field. The kick did not make touch and Luctonians came back strongly, with break by their left wing Rob Crowley and finished off by full back Will Hodnett, who injured himself in the process. Louis Silver added the conversion and they retook the lead at 24 points to 29 after 59 minutes. Sheffield responded well to the pressure and were rewarded on 66 minutes with a try through full back Fergus Wood out on the right. Steve Depledge added the conversion and Sheffield had restored a narrow lead at 31 points to 29. Unfortunately, eight minutes later Sheffield gave a penalty away for a no arms tackle just outside their 22 which Louis Silver converted or Luctonians to restore their lead at 31 points to 31. Sheffield battled back and were awarded a penalty of their own some 20 metres out, but wide out on the left, with 2 minutes left to play. Unfortunately, Steve Depledge's kick drifted agonisingly wide to the left of the posts and Luctonians were able to close out the match by the smallest of margins despite Sheffield out scoring them by 5 tries to 4.