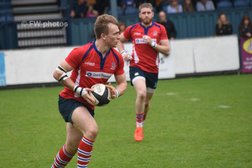 Truly a game of two halves as Sheffield loose their way for 15 minutes to hand Sale victory.

Sheffield RUFC's injury issues were to travel to Heywood Road and Sale FC after the match with Stourbridge last weekend. In addition to those already sidelined, Fergus Wood and Ben Shore would be missing from the action. However, we did see the return of wing Lewis Bowman with Frank Robson moving to the centre from the wing. Dan Williams came into the squad at full back for his first appearance of the season. Up front we were to be without prop forward Ben Whitney and back row forwards Jonny France and Gareth Burns. Joe Cooke came in to the front row with Tommy Marples coming back into the squad on the bench as front row cover. Sean Casey also moved up from the bench and in to the team.

Sheffield made a good start to this match, both in the loose and at set piece, with the pack under no pressure to talk of in the scrum and with the line out functioning, unlike last week. However, with just over 10 minutes gone Sale were awarded a penalty after a ping pong kicking session between the teams. Sale kicked to touch and had a lineout just outside Sheffield's 22. Sheffield appeared to freeze as Sale moved the ball away from the lineout and a number of less than positive tackles allowed Sale's wing, Chris Owen to escape scrutiny and touch down for the first score. Veteran fly half Chris Johnson added the conversion and the home team led by 7 points to nil after 13 minutes. However, Sheffield came back strongly and just a few minutes later were awarded a kickable penalty for not releasing in the tackle, but Andy Hodgson's gaol attempt went agonisingly wide. Sheffield were able however, to keep the pressure on the home team and were awarded another kickable penalty after 23 minutes, which on this occasion Hodgson sent between the post to reduce the deficit to 7 points to 3.

Sheffield soon had another penalty when Sale were adjudged to be off their feet playing the ball at the breakdown. Sheffield moved he ball quickly and full back Dan Williams moved play up to inside Sale's half, but it looked as if all would come to nothing as Dan failed to pass the ball to Rupert Broadley on the wing and was tackled. However, he managed to hand the ball on in the tackle to Rupert, who once again showed the dexterity of his feet by eluding a number of Sale player who were in attendance before showing them all a clean pair of heals to score Sheffield's first try under the posts. Andy Hodgson added the conversion and Sheffield moved into the lead at 7 points to 10 after 28 minutes. Sheffield were straight back on the attack, assisted in no mean way by a line steal by Dom Parsons. Scrum half Steve Depledge box kicked and Sale knocked on. Sheffield were then awarded a penalty at the scrum and Sheffield kicked to the corner. Having secured the ball at the lineout Sheffield drove for the line. Sale pulled it down as the maul went over the line and referee Walbaum awarded Sheffield a penalty try to move the score out to 7 points to 17 in Sheffield's favour after 34 minutes. The half finished with Sheffield very much on top.

The beginning of the second half saw Sheffield substitute prop forwards Joe Cooke and Dan Rylance with Tommy Marples and Dan Hobson, and shortly after that they lost Tom Womack with an injury to has shoulder, to be replaced by Ianto Jones. However, Sheffield seemed to still be in control of the exchanges, but all this was to change with about 15 minutes of the half gone. Sale were awarded a penalty, but Sale's Chris Johnson's kick came up short. Sheffield touched down and took a 22 metre drop out. Sale collected just out side their 22 and set off in attack. Sheffield's defence seemed to freeze and Sale's right wing Aaron Reed skipped through several attempted tackles to run all the way to Sheffield's try line to score Sale's second try. Chris Johnson added the conversion and the Sheffield lead was reduced to 3 points at 14 to 17 with 59 minutes gone. Sheffield suddenly looked vulnerable and Sale were beginning to grow in confidence and just 5 minutes later were awarded a penalty at a scrum. Sheffield's scrum half Steve Depledge had knocked on, but at the resulting scrum, Sheffield drove Sale off the ball and won the ball. Unfortunately, referee Walbaum adjudged that Sheffield had done so illegally. Johnson converted the penalty and the scores were level at 17 points all.

Sheffield now appeared to be all at sea and their defence was opened up almost immediately for right wing Aaron Reed to score his second try without a hand being laid on him. Johnson converted again and Sale led by 24 points to 17 after 64 minutes. This period of madness for Sheffield was unfortunately, nit going to come to an end and just 3 minutes later, Sheffield defence went walkabout again and Sale's number 8 Tom Ailes romped past several despairing tackles to score under the posts. Johnson added the conversion and Sale had the most unlikely of leads at 31 points to 17 and a four try bonus point. Sheffield tried hard to battle back, but he damage had been done and Sale were able to hold on to their lead to the final whistle and a bonus point win. Sheffield have to reflect on a fifteen minute spell in the second half when they looked to be anywhere other than Heywood Road, Sale.