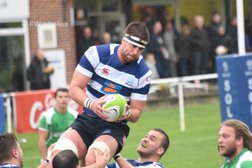 It's another fishing story, and another one gets away.

Sheffield could hardly have got off to a worse start. Wharfedale kicked off, Sheffield secured the ball, but soon turned it over to the visitors who immediately spotted that Sheffield were mentally still in the changing room and proceeded to score the first try through full back Robbie Davidson out to the left of the Sheffield Posts. Fly half Tom Barrett missed the conversion, but Wharfedale had an early 5 point lead after just 2 minutes. However, thus would be not only Wharfedale's first try, but last their last. Sheffield looked very much out of sorts, with numerous errors in all areas of the game and pitch and Wharfedale's Barrett was given a further opportunity to add to the score with a much disputed penalty just 2 minutes later for playing the ball off their feet. Barrett converted and the lead was out to 8 points to nil.

A further penalty went in Wharfedale's favour on fifteen minutes for an offence at the breakdown and once again Barrett converted the opportunity to take the lead to 11 points to nil. Four minutes later Wharfedale had a third penalty opportunity for an offence deemed to have occurred at the scrum, which once again Barrett converted to give Wharfedale a 14 point to nil lead in less than 20 minutes. However, Sheffield began to man-up and put some pressure on their opposition. The teams swapped knock-ons before Sheffield fashioned an attack down the left wing, which saw Wharfedale all at sea and scrum half took full advantage, to score wide out on the left. Unfortunately, Andy Hodgson could not add the conversion, so Wharfedale continued with a 14 point to 5 lead after 22 minutes. Sheffield in general now looked the better team, but a string of errors and some very poor kicking out of hand prevented any addition to their score. However, whilst Wharfedale were under pressure, their fly half Tom Barrett and full back Robbie Davidson's kicking out of hand continuously pushed Sheffield back into their own half and deeper. The remainder of the half saw neither side with a further opportunity to ad to their score.

The second half saw Sheffield all the more in the ascendancy, but the errors and the kicking in general prevented them taking the match by the scruff of the neck. We saw Andy Hodgson miss penalty kicks at goal on 42, 46 minutes. A further penalty came Sheffield way on 53 minutes, on this occasion Steve Depledge took over the kicking duties, but that elusive goal would just not come and the score remained at unchanged. Then on 63 minutes Sheffield manufactured a break down the right through flanker Matt Palphryman, who handed on to Andy Hodgson for Rupert Broadley to score Sheffield's second try. Steve Depledge took the kick again, but again the result was a miss to leave the score at 10 points to 14. Six minutes later Sheffield came up with another break down the right, this time through centre Franki Robson, who again handed on to Rupert Broadley, who looked to be away, but was some how hauled down and into touch by Wharfedale's full back, Davidson. Sheffield continued to press, but a score would just not come and when a further penalty was awarded in front of the posts on seventy two minutes, they elected to go to touch to try and score a third try. The line out was won and Sheffield drove for the line, Wharfedale pulled the maul down, but the referee decided to give a scrum to Wharfedale for held up short, despite the ball having been got to ground. Some chirped and Wharfedale had a penalty. More chirping gained Wharfedale a further 10 metres and the opportunity had gone. All heart seem to fade and five minutes later Wharfedale had their first scoring opportunity o the half wit ha penalty out on Sheffield's 10 metre line, but Barrett was un-nerved and converted and with just 2 minutes left of the match, Wharfedale had a 7 point lead at 20 points to 17 despite Sheffield having score two tries go their one.

Sheffield have over the past five weeks played some very good rugby and should without doubt have won four of the five matches played, and have got bonus points in the other. Sheffield have shown they have the players and the squad to stay in this league, but hey have to play for 80 minutes each week, improve their tactical kicking and kick their goals.