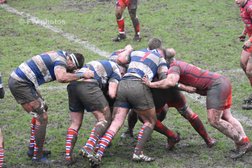 Sheffield get lost in a sea of mud!

The great win at home against South Leicester should have been the springboard to kick start the season’s revival, but Sheffield found themselves stuck in the mud. Literally. Rarely in the modern era have I seen a pitch in such a poor condition. The pitch at Wharfedale two weeks previously was bad, but they had the excuse of having to shovel nearly 4 inches of snow off it in the morning before the match. However, Chester RFC are on the Cheshire plan and generally do not suffer the vagaries of the weather that we teams under the shadow of the Pennines or in some cases, actually on them. The pitch was a complete mud bath and Sheffield suffered the fate of several other clubs this season at the hands of Chester RFC. Apparently, they are due to get a new artificial pith for next season, which will not be a day to late and will require a complete rethink of how they play their rugby.

However, you can take nothing from them, they combined forwards with their backs and appeared to glide over the ground in a way that Sheffield could only dream of doing. They kicked intelligently and pilled heaps of pressure on Sheffield’s defence. And were duly rewarded after just six minutes when their full back Tom Foden went over for the first score. Fly half Josh Morris failed with the not overly difficult conversion, but Chester led by 5 points to nil.

Sheffield did however, battle back and looked capable of getting to grips with the conditions, but a knock on in attack on Chester’s 22 led to a Chester breakout and attack and a penalty with Sheffield scrambling back. Chester took a scrum for the penalty and moments later their scrum half, Richard Craven had gone over wide out on the right. Josh Morris added the conversion and Chester led by 12 points to nil after 17 minutes. However, Sheffield battled back and pressured the Chester defence which hung on as Sheffield conspired to turn ball over in promising positions. However, Sheffield were rewarded after Chester gave away a series of penalties that saw Sheffield with a line out on the Chester 5 metre line. Sheffield secured the ball and drove for the line, with hooker Ianto Jones going over wide out on the left. Steve Depledge missed the conversion, but Sheffield had reduced the deficit to 12 points to 5 after 29 minutes. Sheffield had the better of the remaining ten minutes of the half, but Chester’s defence held firm keeping the visitors scoreless and very frustrated at half time.

The conditions were such that both sides changing their shirts at half time, with Sheffield changing to red and Chester to blue. Chester came out more focused than Sheffield and were soon on the attack and two back to back penalties saw them firmly on the attack just outside Sheffield’s five metre line. Chester were awarded a penalty advantage at the line out and moments later scrum half Richard Craven had scored his second try, this time under the posts. Fly half Josh Morris added the conversion and the lead was out to 19 points to 5after just 4 minutes of the second half. Sheffield regrouped and battled back and for long periods of time were camped in Chester’s 22, and on their 5-metre line, but Chester’s defence was resolute. The game may have turned on 53 minutes when Chester tried to run out of defence and centre |Will Fairclough made a better than average effort at intercepting just out side the 22, but unfortunately, as he took the ball a defender managed to dislodge the ball and Chester had a scrum.

During the nest 20 minutes Sheffield more than matched Chester in every area, but the Chester defence, particularly on their try line, was immense and all Sheffield’s efforts came to nought. The with barely five minutes to go, Sheffield intercepted again, this time through replacement winger, Lewis Bowman, but the ball was subsequently lost and Chester broke out of defence and ran the length of the field to score through replacement Sam Farrar. Josh Morris missed the conversion, but Chester had a 24 point to 5 lead and that is how the game finished with Sheffield muddied and bloodied and extremely disappointed.