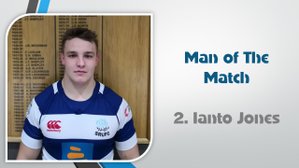 Sheffield front up and deliver a positive performance to take the win and gain a vital bonus point.

Week three saw Sheffield at home to Burton RFC, who have had a tough start to their campaign in Midlands Premier. They lost away in week one to Sandbach, but achieved a four try bonus point, but just missed out on a losing bonus point. They then lost at home to Scunthorpe in week two. Sheffield are still without the services of Andy Hodgson (Concussion), Jonny France, Rob Conville and Dom Parsons. For this match, Will Hodgson returned at fly half, with Matt Law dropping to the bench. Ed Topley moved from the wing to full back, with Rupert Broadly moving back to the wing from centre for Lewis Bowman to return at outside centre. Jack Hawley came in at second row for his first match and fresh from his short retirement, Tommy Marples came into the squad on the bench.

Sheffield got the match underway and after and exchange of kicks, Sheffield were awarded a penalty on half way. Will Hodgson kicked to the corner and Sheffield secured possession at the line out and as the drive disintegrated Ianto Jones emerged from the melee to score the opening try for the home side wide out on the right with barely 4 minutes gone. Steve Depledge added the conversion and Sheffield led by 7 points to nil. Burton kicked off and were soon applying some pressure and were duly rewarded after nine minutes with a penalty 35 metres out, but right in front. Full back Will Simpson took the kick for goal, but the kick slid just past the left upright and the score remained unchanged.

Sheffield were now dominating the majority of the exchanges, but were unable to convert the opportunities into points. Things looked up for the home team when an opportunity to score wide out on the left was disrupted by the actions of Burton scrum half, Chaz Bunting, who was sent to the sin bin by referee Josh Burgess on 23 minutes. Sheffield kicked to touch for a 5-metre line out, but lost the line out when the ball was overthrown and Burton were able to clear their lines. A number of further opportunities came and went for Sheffield, but none resulted in a score of any type. With half time looming, Sheffield were awarded a penalty just over 5 metres out and elected to the take the scrum where they had been dominating. The drive at the scrum went well and number 8 Sean Casey added the second Sheffield try, but Steve Depledge’s conversion went wide for Sheffield to lead by 12 points to nil after 36 minutes and the half finished shortly afterwards without further addition to the score.

Burton got the second-half underway, Sheffield’s Steve Depledge returned the kick. A knock on by Burton led to a scrum just outside Burton’s 22-metre and Sheffield were awarded another penalty at the resulting scrum. Will Hodgson kicked deep into the corner for the line out, but Sheffield managed to lose the ball in contact and Burton cleared the danger, but the kick did not go to touch. Sheffield went on the attack, but lost the ball with a forward pass. Burton made a break from the resulting scrum and then kicked deep into Sheffield territory and Sheffield struggled to deal with the threat. Luckily, in the melee that followed, Burton were deemed to have knocked on and Sheffield were able to relieve the pressure, kicking deep into Burton’s 22-metre zone. Burton knocked on at the back of the scrum. From the resulting scrum, Sheffield drove for the Burton try line. The Burton defence parted and Sean Casey stormed through the gap to score his second and Sheffield’s third try. Steve Depledge added the conversion and Sheffield led by 19 points to nil after 50 minutes.

At this point Tom Womack was substituted with Michael Bradford coming on at hooker and Ianto Jones moving to the back row. Sheffield now looked to be in total control, but one or two unnecessary penalties given away in attacking positions kept handing the initiative back to Burton. However, Sheffield were sufficiently in control to prevent Burton making serious advance toward scoring a try and none of the penalties were in kickable positions. Sheffield kept the pressure on and following a penalty awarded to Sheffield for off side, Will Hodgson kicked to touch for a lineout on Burton’s 22-metre. Sheffield secured the ball and drove toward the try line and when the ball came free, left wing Ali Womack was the grateful recipient, scoring just to the left of the posts. Steve Depledge added the conversion and with 64 minutes gone Sheffield led by 26 points to nil. Sheffield continued to defend well and were able to comfortably repulse all Burton’s attacks, and although they created several further opportunities, Sheffield were unable to convert them and the match ended with the score unaltered.

This was a much better performance from the Sheffield squad, much more focused and positive.

We look forward to our trip to Derby next week.