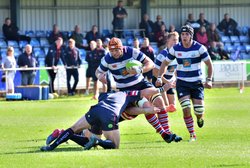 Round five saw Sheffield at home for the third time this season to local rivals Doncaster Phoenix who have, like Sheffield, won only two of their previous four matches. Sheffield were to be without prop forward Ben Whitney, hooker and back row forward Ianto Jones, and centre Rob Conville. Mike Bradford kept the hookers spot and prop forward Tommy Marples returned to the fray on the bench. Joe Cooke also moved up from the bench to start at loose head prop and Matt Law came back into the squad to start at fly half with Will Hodgson dropping to the bench to cover both fly-half and scrum half. Zak Smith came in at openside flanker for his debut match and Adam Davenport came into the squad on the bench for his second outing.

Sheffield were looking to make amends for the poor performance in last week’s second half at Derby. Sheffield kicked off and were soon into the action. Doncaster returned the kick to Andy Hodgson who kicked down the touch line himself. Doncaster attacked down their left touch line, but the ball was turned over to Sheffield. Tom Womack was the recipient of an early pass and sprinted down the wing before handing on to Rupert Broadley who came hard infield. Doncaster were penalised at the breakdown and Steve Depledge stepped up to add the first three points of the match. However, all was not perfect when just two minutes later, Sheffield were awarded a second penalty, but the kick to touch went awry and Doncaster were able to clear their line. Further penalties came Sheffield’s way on seven, ten and twelve minutes before Sheffield were able to take full advantage, with full back Andy Hodgson going over wide out on the left. Steve Depledge could not convert, but Sheffield had an 8 Point to nil lead after 14 minutes.

Sheffield’s pressure was unrelenting at this point in time and Sheffield recorded a second try just three minutes later when scrum-half Steve Depledge went in under the posts. Depledge added the conversion and Sheffield led by 15 points to nil after 17 minutes. Sheffield came again not long after when Mike Bradford had a bullocking run through the Donny Phoenix defence to set up the opportunity for Tom Womack to score under the posts. Steve Depledge added the conversion and after twenty minutes Sheffield led by 22 points to nil. Sheffield were again soon back on the attack and had another kickable penalty on 23 minutes, but Steve Depledge was unable to convert the opportunity and Phoenix had a 22 drop out. Almost immediately, Phoenix were penalised just inside their 22 metre and the referee decided it was time to take further action, with Phoenix fly half Seth Adams getting the yellow card. Sheffield pressed the attack button, taking the line out and driving for number 8 Sean Casey to score on the left. Steve Depledge added the conversion and Sheffield led by 29 points to nil after 27 minutes. Despite being a man down, Doncaster raised their game and defended stoutly, not providing Sheffield with another penalty until after the sin bin was over. However, a penalty came Sheffield’s way just after Seth Adams return. Sheffield kicked to the corner and went for the jugular again, with Steve Depledge being the happy recipient again with a second try. He converted for Sheffield to go in to half time with a 36 point to nil lead.

Phoenix kicked off long and Sheffield replied through Steve Depledge with a kick to touch just outside the 22 metre. Sheffield stole the ball at the lineout. But were penalised at the breakdown for holding on, on half way. Phoenix kicked to touch again for a line out on Sheffield’s 22 metre, but lost the ball again. Matt Law licked long and in the resulting melee Phoenix gave away another penalty. Sheffield kicked to touch for the lineout and having secured the ball, Sean Casey was able to scurry over for his second try of the match. Depledge added the conversion and Sheffield’s lead was out to 43 points to nil after 44 minutes.

Sheffield replaced Steve Depledge with Will Hodgson on 52 minutes and Joe Cooke with Tommy Marples on 55 minutes, but the pressure on Phoenix was unrelenting, particularly at the lineout and in the scrum. With 58 minutes on the clock, Sheffield broke out of defence with Lewis Bowman being brought down just metres short of the Phoenix try line. Phoenix had a scrum from the knock on, but Sheffield drove hard and were awarded a penalty. Sheffield kicked to the corner again and were awarded another penalty at the maul. Sheffield elected for a scrum and drove for the line, but unfortunately, the ball was spilt in the act of trying to score, and the resulting scrum went to Phoenix. Sheffield stole the ball at the scrum and on this occasion went to go through the backs. Phoenix were penalised again for a high tackle right in front of the posts and Sheffield went to the corner again. Over the next few minutes Sheffield managed to somehow not score, despite several opportunities, including being held up over the line. However, the dam had to break under such pressure, and when Sheffield had a five-metre scrum after 67 minutes, Sean Casey was able to touch down for his third try. Andy Hodgson converted and the score was out to 50 points to nil. Sheffield continued to dominate, but no further score was forthcoming and the game petered out, but with Sheffield having secured a very fine victory.

The challenge now is to convert the form from our last two home matches to our away games.

Next week sees us on the road again to Lichfield. With an early kick off at 2:00pm, with Sheffield Ladies scheduled to play Lichfield Ladies straight after the men’s match.