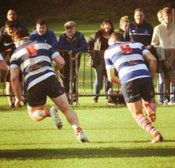 Sheffield’s late start leaves them without a win on the road, but they can take some solace from a much-improved performance later in the match...

After the splendid win at home last week against Luctonians, Sheffield had to travel to high flying Newport Salop down in Shropshire. Much of last week’s team remained in place, but new full-back Laulu Togaga'e was unable to travel and was replaced by Will Hodgson. Also unavailable from last weeks team was backrow forward Tom Womack, who was replaced by Charlie Mason, making his debut, and Prop forward Ben Whitney, who’s place on the bench was occupied by veteran Tommy Marples. Also making his debut on the bench was backrow forward Jason Hignell, who has joined us from Canada. Returning to the squad from injury was centre and utility back, Rob Conville. Still unavailable through injury or for personal reasons are Dom Parsons, Andy Hodgson, Zak Smith and Jonny France.

Sheffield made the worst of all possible starts. They knocked-on from the kick off, Newport broke from the scrum and Sheffield’s defence opened like the Red Sea, with barely one minute on the clock Newport’s inside centre Hendry Vaka powered to the try line to score wide out on the left. Fly half Jake Leonard missed the conversion, but Newport led by 5 points to nil. Sheffield recovered and were soon pressuring the Newport defence and with 5 minutes gone were awarded a penalty for a high tackle, which scrum half Steve Depledge knocked over to reduce the deficit to 5 points to 3. However, Newport soon found another, somewhat gaping, hole in the Sheffield defence; this time Vaka was the one through the gap before passing on to centre partner Liam Holder to score near the posts. Jake Leonard added the conversion to take the score to 12 points to 3 in favour of the home team after 11 minutes.

Sheffield had two opportunities immediately after this with penalty kicks at goal on 13 and 16 minutes, but Steve Depledge could convert neither, hitting the upright with one. Then with 23 minutes on the clock Newport found a further hole in the Sheffield defence when second row Nathan Parker strolled through and made good ground before the backs took charge and Holder got his second try. Jake Leonard was off target again, but he Newport's lead was out to 17 points to 3. However, Sheffield now appeared to have the bit between their teeth and continued to pressure the home team, and with time in the half running down Sheffield were awarded a further penalty. They decided to go to the corner on this occasion and from the resulting lineout took Newport’s pack on and drove over for hooker, Ianto Jones to score wide out on the right. Steve Depledge had re-adjusted his radar and converted to reduce the Newport lead to 17 points to 10 after 34 minutes. Sheffield kept the pressure on and Newport were penalised several times, but none within kicking range until 3 minutes into time added on, when Steve Depledge was able to convert a second penalty to take the score at half time to 17 points to 13.

The beginning of the second half saw Sheffield straight on the attack, but Newport held firm and repulsed the endeavour. Sheffield turned ball over on Newport’s 22 metre and Newport cleared to half way. Sheffield contrived to lose the line out and Newport Spread the ball from side to side, before their back row took control and bashed their way to Sheffield’s try line, with number 8 Henry Purchase scoring the bonus point try. Jake Leonard added the conversion and Newport were 11 points clear again. Sheffield regrouped and were soon back in Newport territory, when Newport erred again, Sheffield kicked to the corner and from the line out went over, Ianto Jones in for his second try. Steve Depledge added a brilliant conversion from the touch line and the match was back in the mix at 24 points to 20 after 55 minutes.

The game somewhat ebbed and flowed, but Sheffield suddenly began to look a little ragged, giving the odd penalty away. Newport took full advantage and from a penalty on half way they kicked to the corner, from the resultant lineout they drove for the Sheffield try line and despite some desperate defence were able to score their fifth try through hooker and captain, Tom Cowell. Jake Leonard added the conversion to take the lead out to 31 points to 20 after 68 minutes. Sheffield battled back hard and when Newport’s replacement prop Siphowokuhle Bakeni, was yellow carded, Sheffield felt they had a chance with 8 minutes to go. They truly did have a chance, and for several minutes were camped on Newport’s try line. Unfortunately, Newport battled just as hard and held Sheffield’s attack through the forwards at bay. Newport took control of the last few moments of the match and managed to close out any last effort from Sheffield.

Despite the loss, Sheffield will feel that this is a small step in the right direction, as they try to pick up that elusive win on the road. With a high-stakes home game against Nuneaton next Saturday, confidence will still be high as Sheffield reflect on a 100% home record and will feel that anyone visiting Abbeydale stand a strong chance of finishing second best.