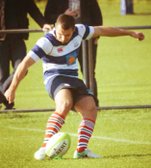 Sheffield Show grit and determination and no little skill to take the spoils at Sandbach.

Sheffield travelled to Sandbach with what was, at least on paper, our strongest line up away from home this season, despite the loss of Angus Hughes to concussion in the Nuneaton match on the 3rd of November. Angus was replaced by Zak Smith in the back row and Tom Womack and Jason Hignell swopped positions in the back row and on the bench. Ali Womack gave way to Lewis Bowman, who moved from centre to wing with James Flint returning at outside centre. Former captain Dom Parsons returned to the second row for his first match of the season, with Jack Hawley dropping to the second XV after a very good run in the second row.

Sheffield kicked off and the tone for the first half was set immediately, when Sandbach failed to take possession of the ball and had to scramble in defence before managing to clear to their own 10-metre line. Sheffield conspired to knock on at the lineout, but then at the scum drove the Sandbach pack back and Sandbach were scrambling again to retain possession. Sheffield were awarded a penalty and kicked to touch for a lineout on the Sandbach 22-metre. From the lineout Sheffield formed a driving maul, but when the ball went wide the Sandbach defence came up quickly to try and snuff out the attack, but managed to knock the ball on in the tackle. Sheffield broke from the scrum and right up to the Sandbach 5-metre for openside flanker Zak Smith to go over 10 metres to the right of the posts. Scrum half Steve Depledge added the conversion for Sheffield to lead by 7 points to nil after just six minutes. Sheffield kept the pressure on, Matt Law kicked deep and Sandbach returned the kick to touch to give Sheffield the lineout on the Sandbach 10-metre, but hen managed to give a penalty at the lineout to enable Sheffield to kick into the corner for another lineout. The ball was lost, but Sandbach’s clearing kick did not make touch allowing Sheffield backs to combine to take play back up to Sandbach’s try line with right winger Rupert Broadley going over in the corner for the second try. Steve Depledge’s conversion was just wide, but Sheffield led by 12 points to nil after 12 minutes.

However, two minutes later, Sandbach were on the score sheet with a penalty kick through flyhalf Ben Elliott. Sheffield were however, very much in control of the action and despite some heroic defence from Sandbach, Sheffield could smell blood and were intent on severing the artery. Sheffield soon found themselves knocking on the door of the Sandbach try line and were awarded a penalty and once again went for touch in the corner. Sheffield secured the ball and came in field with the attack for left wing Lewis Bowman to burst throughs hole to score under the posts. Steve Depledge once again added the conversion and the lead was out to 19 points to 3 after 20 minutes. Once again, Sheffield erred and referee, Peter Caunt awarded Sandbach a penalty. Fly half Ben Elliott converted and the lead was reduced to 19 points to 6 after 23 minutes. However, Sheffield were again to burst the Sandbach mini-bubble when Sheffield were awarded a penalty for a high tackle straight from the kick off. Sheffield kicked to the corner for the lineout again, but managed to lose the ball allowing Sandbach to clear. Unfortunately, the kick failed to reach touch and fell into the waiting hand of full back Laulu Topagae who turned on the gas to burn through the Sandbach before putting winger Lewis Bowman in for his second and Sheffield’s fourth try. Steve Depledge added the conversion and Sheffield led by 26 points to 6 after 26 minutes. Sheffield may have thought it was all over, but Sandbach had other ideas, and as Sheffield relaxed Sandbach started to grow in stature in the match and with Sheffield beginning to make mistakes, Sandbach pushed hard to get back into contention, but Sheffield’s defence held firm and kept the score unchanged up to half time.

The beginning of the second saw Sandbach taking a very firm grip of the encounter. Sheffield’s scrum, so dominant in the first half, suddenly looked very fragile and Sheffield found themselves under the cosh and only some very determined defence kept Sandbach out. However, the creaking scrum was now a problem with the referee, resulting in a number of penalties. The pressure from Sandbach and the problem at the scrum was al most certainly going to lead to a Sandbach score and so with fifty-six minutes gone the inevitable happened, with Sandbach going over in the corner with a score got prop-forward, Gareth Caen. Ben Elliott failed to add the conversion, but Sandbach were back in the match at 11 points to 26. Sheffield remained under pressure and were having to defend passionately to keep the home team at bay. However, with Sandbach on the attack inside Sheffield’s 22-metre they coughed up the ball. In these circumstances, one would have expected Sheffield to kick to clear their lines. However, the ball had fallen to full back, Laulu Topagae who doesn’t do kicking and he set off on a run toward the Sandbach line and as he crossed the Sandbach 10-metre, he found scrum half Steve on his inside. Depledge showed a rare turn of speed and scored the fifth try, albeit against the run of play in the half. He failed with the conversion of his own try, but the lead had been restored at 31 points to 11 after 65 minutes. The score took both the wind out of Sandbach’s sails and the heart out of their resistance and Sheffield began to reassert themselves, and again started to take control of the scrums and whilst Sandbach tried hard to reduce the deficit, the task proved too difficult and the match finished without any further addition to the score.