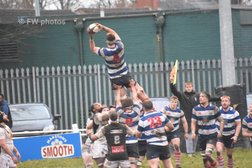 A topsy turvy, roller coaster of a match sees Sheffield dig deep and play that all so hard to find ‘Get Out of Jail Card’...

Sheffield Travelled to Burton RFC after the Christmas and New Year Break in the hope of getting their season back on track after the disappointment of the loss to Broadstreet. The team saw the welcome return of Rupert Broadley on the wing and also the return to the team of Jack Hedley, last seen in Sheffield colours at the end of the 2016-17 season in the play-off match with Rossendale, when he scored two of the tries that took us into National 2. Jonny France was unavailable, so we saw Sean Casey move from openside flanker to number 8 and Angus Hughes move up off the bench to openside, Tom Womack returned to the bench after injury. Ben Parker dropped out of the starting line up to complete the bench.

The Burton squad contained only five players form the match at Sheffield on the 15th September, now with a smattering of South Africans, Eastern Europeans, and an Italian fly-half, so this was never going to be quite like the first match. Sheffield got off to an electric start from the kick off when Burton returned the kick straight out, giving Sheffield a line out on Burton’s 22-metre line. Sheffield secured the ball and drove for the try line. The ball came infield and James flint carved a line to score out on the left. Steve Depledge converted the try and Sheffield led by 7 points to nil in less than three minutes and looked to be on their way. Sheffield looked to be in the process of scoring a second try just five minutes later when Rupert Broadley scythed a line through the Burton defence with only the full-back to beat, but referee Dan Rowlands decided that there had been deliberate crossing and awarded Burton a penalty. They kicked to the corner with the mighty boot of full back Will Simpson and secured a line out just outside Sheffield’s 22-metre, but Dave Clayden rose majestically to steal the ball. Steve Depledge kicked from the back of the line out and Burton returned to kick, Sheffield knocked-on, and then gave a penalty away for off-side. Burton kicked to the corner again and secured the ball from the line out, where Sheffield gave away another penalty. Burton picked up and drove for the try line, securing a try moments later through number 8 and captain Dominic Taylor. Will Simpson’s conversion hit the left upright and Sheffield still led, but only by 7 points to 5 after eleven minutes.

Burton looked to be playing with confidence and pace and Sheffield looked a little shaken as they piled on the pressure. However, Burton conceded a penalty allowing Sheffield to clear their lines and secure a lineout on Burton’s 22-metre. Unfortunately, Sheffield lost the ball and Burton carved their way through the Sheffield defence to score out on the right through blind-side flanker, Jack Neal. Will Simpson added the conversion and Burton led by 12 points to 7 after 19 minutes. Burton continued to be the dominant team and Sheffield had to battle hard to stay in the match, which for a while was beginning to look to be a re-run of the away match at Derby earlier in the season. Burton increased their lead after twenty-seven minutes, with a penalty kick after a palm down from the line out went forward and Sheffield’s retreating pack were caught off-side. Will Simpson converted and the lead was out to 15 points to 7. However, Sheffield dragged themselves back into contention. Burton contrived to make a complete hash of getting the ball away from a defensive situation and with the ball bouncing all over the place from the attempted clearance, it shot forward off Jack Hedley’s legs and whilst Burton looked for a knock-on decision, Rupert Broadley pounced and Sheffield had a second try wide on the left. Steve Depledge couldn’t convert, but Sheffield were back in things at 15 points to 12 after thirty-two minutes.

For most matches this would have been enough stress for our pacemakers, but not this match. Sheffield were almost immediately back on the attack from the restart, and from a line out on the left the ball came right where left-wing Jack Hedley popped up on a loop and found a huge hole in front of him. He carved his way through the defence from the half way line and despite the attentions of several desperate defenders found his way to the line to score Sheffield’s third try on thirty-six minutes. Steve Depledge converted and Sheffield had the lead once more, at 19 points to 15. And yet, there is more. With the clock knocking hard on time in the half, Sheffield lost Jack Hedley to injury, to be replaced by Ben Parker, requiring a rearrangement of the back division, which may have had the effect of leaving Sheffield a little flat footed, but Burton took full advantage and their left wing, Saba Svimonishvili, found plenty of space and strolled in to score close to the posts. Will Simpson added the conversion and Burton had regained the lead at 22 points to 19 as the whistle went for the end of the half.

Just three minutes into the second half, Burton lost their loose head-prop to injury and at the next scrum referee Rowlands asked that they reset four times and then Burton lost their way for a moment of two. Sheffield had a penalty from the scrum and kicked long, too long, missing touch. Burton counter attacked, but a loose pass left Sheffield in possession on half-way. The ball was whipped down the Sheffield back line in to the hand of Lewis Bowman, now on the left wing, who had clear water in front of him and strolled in to score the fourth Sheffield try. Steve Depledge missed the conversion, but Sheffield led once again after forty-seven minutes by 24 points to 22. Sheffield began to look more confident, and were getting the better of the exchanges and with a penalty allowing them to kick to Burton’s 22-metre line, they were on the attack. A further penalty at the lineout gave Sheffield another lineout on the Burton 5-metre line. Sheffield secured the ball and drove for the line, with Tom Womack crashing over for try number five wide out on the right. Steve Depledge missed the conversion, but Sheffield led by 29 points to 22 after 54 minutes.

This was the point where it all went pear-shaped for Sheffield. Burton kicked off, secured the ball, Harry Titley on as replacement fly half for Burton chipped through and Will Simpson pounced to score wide out on the left. Simpson missed the conversion and Sheffield held on to a slender lead at 29 points to 27 after fifty-seven minutes. Things got worse just four minutes later when Burton were awarded a penalty in front of the posts which Simpson converted to give Burton the lead at 30 points to 29. Sheffield pressed the panic button and attacked Burton as forcefully as they could to try and regain the initiative, and with over fifteen minutes to go were confident of pulling things out of the fire. With sixty-nine minutes gone, Sheffield were given the opportunity to take the lead again with a penalty kick of their own on the Burton 22-metre line. Steve Depledge pulled the kick and hit the left upright. The ball fell back in to the arms of a Burton player and the danger was cleared. Opportunity knocked again with barely two minutes to go with a further penalty. But on this occasion Steve Depledge handed the kicking duties over to Will Hodgson. Unfortunately, Will also missed the all-important kick at the posts and Burton breathed a very heavy sigh of relief and must have believed they had done enough to take five points from the match. However, Burton had to restart the match with a 22-metre drop-out, which Sheffield were able to run back at them hard. Sheffield bashed and smashed at Burton’s defensive wall and with the clock into overtime any mistake would hand Burton the match. The mistake did not come and Sheffield found themselves camped on Burton’s five-metre line, eventually Burton were found to be defending too tight and Sheffield had played the ‘Get out of Jail’ card when Andy Hodgson breached the defence to score to the right of the posts. Will Hodgson added the conversion and Sheffield had stolen an unlikely win by 36 points to 30 and taken five valuable points.

Up-coming fixtures in the New Year:-