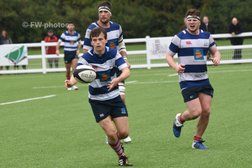 Sheffield were ready to entertain a Derby team that had won comfortably when we visited Derby in Sepember. However, they were to be without Jack Hedley on the wing, who was injured last week and was also due to return to his studies sat Durham University. Centre James Flint was also unavailable and was replaced by Ben Parker moving up from the bench. Matt Law was to return to the squad after injury and would be available from the bench. Otherwise the only other changes were the reversals of starting and bench for Ben Whitney and Joe Cooke in the front row and Tom Womack and Angus Hughes in the back row.

Sheffield once again got off to an electric start. Derby kicked off, Dave Clayden secured the ball and Will Hodgson kicked deep into Derby territory. Derby’s 15 kicked to touch and Sheffield had a line on half way in front of the stand. Sheffield’s pack drove on before the ball came to the right, with Derby caught defending far too tight allowing Zed Richards to score in the corner. Steve Depledge converted from the touch line and Sheffield led by 7 points to nil with less than 2 minutes on the clock. However, from that point on there was very little to get excited about. Sheffield had a line out on Derby’s twenty-two metre line, Derby stole the ball, but when the Derby scrum half kicked, the kick was charged down. Unfortunately, the ball went in to touch with several Sheffield player in hot pursuit, but Sheffield had a line out on Derby’s 5-metre line after just seven minutes. However, the lineout was lost again and Derby were able to velar their lines. Any further excitement was lost in the heavy breeze with neither side “pulling up any sticks”. Sheffield had two kickable penalties in the first half, but declined to take them, kicking instead to the corner, and coming up dry on both occasions. Derby also had one chance to put points on the board after 29 minutes with s penalty kick at goal, for off-side, but the normally unerring George Castledine came up short with the kick, in no part due to the fairly strong windy conditions, and the half petered out without any further score.

The second half had little more to offer the assembled spectators. With three minutes played, the referee decided to yellow card both teams’ hookers, for an incident that he clearly did not actually see, but he find interesting when he watches the video. He awarded a scrum, with the put in to Sheffield and then a penalty to Sheffield. The Sheffield faithful screamed loud and long for the kick at goal to be taken, and it was. Steve Depledge converted and Sheffield now led by 10 points to nil after forty-four minutes. With the match in the last quarter and with Sheffield attacking close in on Derby’s line, Derby’s fly-half, George Castledine was adjudged to have taken the Sheffield wing down with a high tackle and was also sent to the sin-bin. Sheffield kicked to the corner, but after securing the ball knocked on and Derby cleared the danger. The final ten minutes however, belong to Derby. They pressured Sheffield with far more intensity than they had in the whole of the match to this point and spent much of the period camped on Sheffield’s 5-metre line. However, Sheffield’s defence was the most resolute it has been this season and “they shall not pass” came very much to mind. Sheffield saw both Dom Parsons and Sean Casey yellow carded ion the last few minutes, but Sheffield still managed to keep the Derby attack out. Eventually however, Derby had a penalty in front of the posts, the referee declared that time was up, and whist there was time to play on, Derby realised that even a converted try would only give them a loosing bonus point and there would be no chance of coming back for more, and no guarantee of scoring a try sat all. They sensibly went for the penalty kick, with George Castledine converting and the match ended with a very hard fought Sheffield win by 10 points to 3.