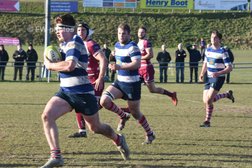 Dogged defence and some lively attacking see Sheffield home with the spoils in an enthralling high quality match.

After the disappointment of last Saturday’s trip to deepest Herefordshire and Luctonians, Sheffield were to face high flying Newport Salop from Shropshire, who have made second spot in the league behind Scunthorpe, very much their own. However, Newport lost narrowly to Scunthorpe 15 - 16, last week at home, in as match they believe they should have won, and Sheffield went into the match determined to reverse the match result at Newport, when the Shropshire team came out on top by 31 - 20, with a late try after Sheffield had battled back to 24 - 20. Sheffield went into the match with the returning Ianto Jones at hooker, his first appearance since being injured in the win over Derby on the 12th January. Lewis Bowman moved from the wing to the centre to partner James Flint with Ben Parker dropping to the bench and Ali Womack coming off the bench last week to start on the left wing. Tom Womack swapped places at open-side flanker with Angus Hughes and the bench with Angus getting the start, and Ben Whitney and Joe Cooke did the same at loose-head prop with Joe getting the start.

Sheffield kicked off and Newport came out all guns blazing, pressuring Sheffield’s resistance in all areas of the field. However, Sheffield looked to have planned for the assault and the defence held firm. However, two penalties for high tackles after five and eight minutes put additional pressure the Sheffield defence. The second of these penalties was kickable, but Newport elected to go to the corner for the line out, but a penalty to Sheffield helped to alleviate the pressure and Sheffield were themselves on the attack. However, the lineout was lost and Newport cleared their lines. Sheffield immediately moved the ball left and it looked like Ali Womack had scored in the corner, but referee Toby Rowe decided there had been a forward pass and awarded Newport a scrum. Newport broke from the scrum, but at the breakdown Ianto Jones was over the ball like a rash, and won the penalty. Steve Depledge converted and Sheffield had the lead at 3 points to nil after fourteen minutes. The battle raged with both teams creating opportunities to score, but both defences held firm. Sheffield Thought they had scored a gain when Ali Womack once more found a huge hole in Newport’s defence and went in under the posts. However, our referee decided that their may have been some blocking and the try was chalked off. However, Sheffield had their tails up and began an assault on the Newport try line and were twice denied by the referee deciding the drives had been held up. However, the dam was eventually breached when Will Hodgson sneaked over about fifteen metres to the left of the posts. Unfortunately, Steve Depledge’s conversion hit the right up right and the conversion was missed, but Sheffield led by 8 points to nil after 34 minutes, which is how the first half finished.

The second half did not start well for Sheffield when they were penalised for not rolling away and outside centre Monty Maule converted the opportunity to reduce Sheffield’s lead to 8 points to 3 after two minutes of the half. A few minutes alter with Sheffield attacking inside Newport’s 22-metre, there was a totally outrageous deliberate knock on by one of Newport’s forwards who managed to get he ball at the second attempt and made his way to half way before being hauled down. The knock-on went unpunished and seemingly unseen by the referee. However, Sheffield were soon able to mount a very promising attack, which looked certain to see Rupert Broadley go over on the right with Newport’s defence very stretched, but the final pass was somewhat wild and the ball careered into touch for a Newport line out. Newport secured the ball at the lineout and mounted an attack of their own, which led to a score under the posts for openside flanker Jack Price, despite what appeared to have been several forward passes in the move. Monty Maule added the conversion and Newport had the lead at 10 points to 8 after fifty-one minutes.

Matters did not improve greatly for Sheffield despite some good play and some very dogged defence, and with Newport being awarded a penalty after sixty-one minutes, which Maule converted again, Newport now had a 13 point to 8 lead. However, Sheffield recovered and started to mount a series of attacks and Newport were penalised several times and eventually a high tackle, saw a yellow card handed to second row forward Nathan Parker after sixty-eight minutes. Sheffield kicked to the corner, but a call of not straight was to give Newport relief, however, the kick was not overly long and soon Sheffield were battering on the Newport try line. Sheffield were awarded a penalty in front of the posts on seventy-four minutes, but decided to go for glory, all or nothing, and took the scrum, where we had shown some strength. The pack drove forward, Newport erred and the referee’s arm was out for another penalty, but played the advantage and Sheffield were deservedly awarded the try, through Sean Casey. Steve Depledge added the conversion and Sheffield led by 15 points to 13 with barely five minutes remaining. Newport battled hard and Sheffield responded, defending like trojans, and as time ran out were awarded a penalty on half-way. The referee said there was time to play, so Sheffield had to take the penalty and take the line out. Ball secured, a couple of drives and Steve Depledge fired the ball into touch to end the match for a very hard fought victory over a very good Newport team.