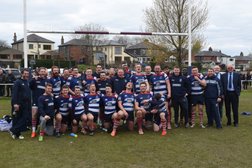 Two turn over errors and a small lapse of concentration cost Sheffield very dear and take the shine off a very good, hard fought performance.

Sheffield camo to this match having not played since the 2nd March, with the match against Sandbach being postponed twice because of the weather. In addition, the injuries sustained by scrum half Steve Depledge and fly half Will Hodgson have persisted to ensure they were not available for this match against the league leaders. The back division was therefore, somewhat reshuffled, with former colt Elliot Fisher coming in at scrum half for his first start, and Matt Law coming back into the team after his time away with Yorkshire Under 20’s at fly half. Wing Ali Womack was also unavailable, so James flint moved from inside centre to the left wing, and Ben Parker came into the centre in his place. In the pack we saw the welcome return of hooker Ianto Jones, despite the excellent performances of Michael Bradford. The bench saw the return of utility forward, Tobi (the Wrecking Ball) Ademakin.

Sheffield started the match well enough, but a couple of penalties soon put Scunthorpe in a good attacking position and following a series of drives from their pack, the ball was spun wide for hooker, Gareth Mist to score out wide. Paul Cook added the conversion and Scunthorpe had and early 7 point to nil lead after five minutes. However, Sheffield struck back almost immediately. They were awarded a penalty at the breakdown gave Sheffield field position just 10-metres out. Sheffield’s pack drove for the line, and almost inevitable, Ianto Jones crashed over the try line. Ben Parker added the conversion and the scores were tied at 7 points all after just 8 minutes. The battle raged with the sides appearing to be exceedingly well matched. Sheffield were however, were dominating the scrum and the breakdown, where Scunthorpe were penalised several times. With the first quarter coming to and end, Sheffield had a penalty on their own 10-metre line, but the kick to touch failed to go out and Scunthorpe were able to clear their lines. However, a penalty to Sheffield les then 2-minutes later at a scrum on half way gave Sheffield the opportunity to get back on the attack on Scunthorpe’s 22-metre. The ball was moved all the way across the back division from right to left and started on its way back, before Lewis Bowman found a hole in the defence and managed to off-load to full back Andy Hodgson, whose support play was excellent allowing him to score under the posts. Ben Parker added the conversion again and Sheffield led by 14 points to 7 after 24 minutes.

However, an injury to prop forward, Ben Whitney 3-minutes later appeared to upset Sheffield’s concentration and Scunthorpe took full advantage. The ball went straight from a scrum to Scunthorpe’s fly half, Tom Foster, who took off on his own and unfortunately, a few missed tackles from Sheffield allowed him in to score close by the posts. Paul Cook converted and the scores were once again tied, at 14 points all after 28 minutes. The final 10-minutes of the half however, belonged to Sheffield. They denied a try be referee Rowe, when he declared a try held up over the line after a concerted period camped on Scunthorpe’s line. This led to series of scrums to Sheffield and several penalties against Scunthorpe at the scrums, but as the half ran into overtime Sheffield had yet another scrum from a penalty, but with Scunthorpe’s front row flat on their faces and back row totally detached, the referee decided to give Scunthorpe a bizarre penalty to relieve the pressure and kill off the half!

The second half however, saw Scunthorpe came out somewhat faster than Sheffield, and were soon on the score sheet. Sheffield were on the attack on half way, but contrived to turn the ball over and right wing, Sam Morgan raced away before passing to blind-side forward, Jacob Hardy to score wide out on the right. Paul Cook failed with the conversion, but Scunthorpe led by 19 points to 14 after just 3 minutes of the half. The two teams remained very much in the contest and neither side seemed able to gain ant=y real advantage. However, with the second quarter coming to an end, Sheffield were awarded a penalty allowing them to kick into the corner, but at the lineout managed to lose the ball and give Scunthorpe a scum on their 5-metre line. Their clearance gave Sheffield another line out on the Scunthorpe 22-metre. The ball was secured and was once again moved through the backs, with full back Andy Hodgson kicking through the Scunthorpe defence, for right wing Rupert Broadley to race through and steal the ball from the full back’s hands and score in the corner. Ben Parker added the conversion and Sheffield led again by 21 points to 19 after 59 minutes. However, a penalty to Scunthorpe on sixty-five minutes by Paul Cook, saw Scunthorpe take the lead at 22 points to 21.

However, Sheffield looked more than capable of taking the lead back and were attacking just outside Scunthorpe’s 22-metre, when a pass from a breakdown in the direction of Lewis Bowman, bobbled along the ground and gave him little, or no chance of securing it. Former Rotherham centre, Will Robinson, picked up and showed a very clean pair of heals to Sheffield’s defence, to score under the posts. Paul Cook added the conversion and Scunthorpe had a 29 point to 21 lead on seventy-five minutes. Bizarrely again, two minutes later fly half Matt Law received a yellow card for off-side, when Sheffield had had no recent infringements penalised, but quite obviously the Scunthorpe crowd were screaming for blood at every incident and getting their wishes. Paul Cook converted the penalty and the lead was out to 32 points to 21. With time running out Sheffield mounted yet another attack, and a penalty at the breakdown, as recurring theme in Scunthorpe’s game plan, saw Sheffield kick to touch on Scunthorpe’s 22-metre for one last push. Unfortunately, the line out was judged to be not straight and the match ended with a whimper.