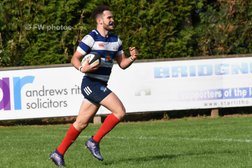 Sheffield show real determination to take all the spoils in picturesque Bridgnorth.

Sheffield travelled to distant Bridgnorth having completed two pre-season warm up games against opposition from the league above, National 2 North, and although both games had resulted in defeats were confident that they had acquitted themselves well for a return to action in the Midlands Premier League.

The team selection showed the inclusion of a number of Old favourites including Andy Hodgson, Dom Parsons, Dave Clayden, Tom Womack and the irreplaceable, Tommy Marples. The squad also included a number of new boys in wings Sion Cowdy and Nick Marshall, and prop forward Jake Hincklin. Also, on the bench were former colts, Kai Ramrattan and Tom Farrell. We also saw the transition of former flanker, Angus Hughes in to our hooker.

With a good crowd in attendance and perfect conditions for running rugby, Bridgnorth had the best of the early exchanges, resulting in a penalty kick converted by centre, Llewelyn Williams after 10 minutes. However, Sheffield were soon back at the races with a penalty of their own on 15 minutes, converted by fly-half, Will Hodgson. Bridgnorth suffered the loss of tight-head prop, George Newman to injury, to be replaced by Ben Prior, a former Bridgnorth mini and junior. Sheffield continued to dominate at this point in the match and after a prolonged period camped in Bridgnorth’s 22-metre were rewarded when centre and captain, Lewis Bowman scored. The try was unconverted, but Sheffield led by 8 points to 3 after 26 minutes. The domination continued, and again Sheffield were rewarded, this time with a try from a driving maul, reputably scored by second-row Dom Parsons. The try was converted by Will Hodgson and Sheffield went in to half time leading by 15 points to 3.

The beginning of second half saw Bridgnorth somewhat resurgent, and were initially rewarded with a second penalty from Llewelyn Williams after five minutes, and then an unconverted try from hooker Luis Evitt after 12 minutes, to reduce Sheffield’s lead to 15 points to 11. However, Sheffield once again raised their game and once again were awarded a penalty on 60 minutes, which again was converted by Will Hodgson to extend the lead once more to 18 points to 11. At the restart, Bridgnorth suffered the temporary loss of loose-head prop George Cave to a yellow card and Sheffield took the option of kicking to touch in the corner and asked the pack to take on the driving maul again. Sheffield secured the ball and duly scored in the corner, this time through hooker Angus Hughes. Will Hodgson converted and Sheffield led by 25 points to 11 on 64 minutes. Shortly afterwards, the angels were with Sheffield again when, as Bridgnorth tried to force the game Sheffield intercepted and captain Lewis Bowman was able to run in from half-way to go in under the post. Will Hodgson converted again and Sheffield had the lead at 32 points to 11 and a fourth bonus point try with 73 minutes gone and the scoring came to an end.

Sheffield will be very pleased with both the result and the performance. Having lost Alex Fawdry to injury in the pre-season match at Sheffield Tigers, and with the loss pretty well all last season’s front row forwards in Ianto Jones, Dan Rylance and Ben Whitney, the transition seams to have worked quite well.