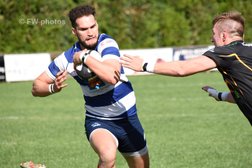 The proverbial game of two halves as Sheffield come late to the party to steal the match and gain a valuable bonus point.

Sheffield went on the road again to local rivals Doncaster Phoenix for a Friday evening game on the artificial pitch under lights. Once again, second row Dave Clayden was absent and Joe Cooke was to remain in the second row. The late withdrawal of Sion Cowdy, led to a re-arrangement in the back division with Andy Hodgson moving up from the bench to full back, with centre Jamie flint moving out to the left wing and George Castledine moving into the centre, and Ben parker came back into the squad on the bench. Reece Turner came into the squad for the first time to cover for front row replacement.

Sheffield did not make an auspicious start to this match, which was both a league match and the first round of the Yorkshire Cup. Playing on the artificial pitch under lights, Doncaster Phoenix took full advantage of their knowledge of the pitch and lighting and were rapidly on the score board with try out on the left through outside centre, Will Smith and with fly-half Will Burden converting, led by 7 points to nil after just 4 minutes. Sheffield hit back quickly with a penalty just two minutes later, converted by fly-half Will Hodgson, but the lead was restored by Phoenix, again another two minutes later when Will Burden kick ed a penalty to make the score 10 points to 3 after 8 minutes.

However, Sheffield managed to get back on the score board with a second penalty after twenty-four minutes to reduce the lead to 10 points to 6. In the early stages of the match Phoenix appeared to have the upper hand at the scrum, but slowly their dominance began to wane and Sheffield were able to get back on parity. However, with the clock almost over for the half, Sheffield suffered the loss of Will Hodgson to the sin-bin for playing the scrum half at the breakdown and with Will Burden converting they went into half time with a lead of 13 points to 6.

Sheffield were caught out again just a few minutes into the second half with a penalty for hands in the ruck right in-front of the posts, which again Burden converted to move the score to 16 points to 6. Doncaster Phoenix then gained a little bit of luck when Sheffield knocked on in Phoenix’s 22-metre and they were able to break from the scrum. A speculative kick down the touch line bounced horribly, and popped in the hands of the right wing who was able to hand on to Will Burden who was able to run in free and clear under the posts. Burden converted his own try and Phoenix led by 23 points to 6 after forty-eight minutes.

The second try for Phoenix appeared to act as a wake-up call for Sheffield, and just three minutes later a break by Steve Depledge created the opportunity for backrow Sean Casey to score wide out on the left. Unfortunately, Will Hodgson’s conversion on his return from the sin-bin was wide of the mark and Phoenix led by 23 points to 11 after fifty-one minutes. Sheffield rallied again from the kick off and almost immediately saw Phoenix’s full back, Josh Winter sent to the sin-bin. Sheffield took full advantage and prop-forward Jake Hicklin was the happy recipient and scored Sheffield’s second try. Again, Hodgson could not convert the try, but the lead had been reduced to 23 points to 16 after 58 minutes.

Sheffield were now pushing hard at Phoenix’s defence and from the kick off some smart tactical kicking put Sheffield deep into Phoenix’s 22-metre. Then, when Sheffield stole Phoenix’s lineout, Steve Depledge took advantage from the driving maul to go over for the third try in the corner on the right. Suddenly, Hodgson found his kicking boots and landed the conversion to level the scores at 23 points all after sixty-two minutes. There has to be however, a twist or two in the tale. Sheffield knocked on at the restart, giving Phoenix territory and possession in-front of the posts in Sheffield’s 22-metre. A rather unnecessary penalty gave Phoenix the opportunity to go ahead again. They took the option of the kick at goal, which Burden converted to re-establish the Led a t 26 points to 23 after sixty-five minutes. Then the second twist came. Phoenix secured the ball from the kick-off, but soon managed to turn it over and somehow Sean Casey found a huge hole in the Phoenix defence to score Sheffield’s fourth try just to the right of the posts and secure a bonus point. Will Hodgson converted and Sheffield led for the first time in the match by 30 points to 26 after sixty-eight minutes. Doncaster Phoenix battled hard to save the match, but the effort was somewhat blunted when prop-forward Scott Wilson was yellow-carded with four minutes to go and Sheffield were able to clear their lines and see out the last few minutes to secure what thirty minutes earlier had seemed a very unlikely outcome.