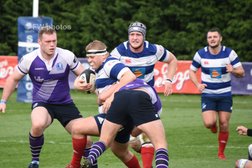 Sheffield take full advantage of some early loose play from Kettering and then stand firm to close out the match with seven excellent tries.

Following the euphoria of Sheffield’s comeback at Doncaster Phoenix last Friday evening, Sheffield looked forward to taking on the unknown quantity that was Kettering RFC. Kettering were promoted from Midlands 1 East having won twenty-four of their twenty-six matches, and having won three of their matches this season, two of which were against quite tough opposition in Nuneaton and Paviors, albeit by small margins.

Sheffield once again went into the match without second row Dave Clayden and number 8, Alex Fawdry who is unlikely to feature before the Christmas break. Also absent was full back Andy Hodgson, which all led to a rearrangement of the squad, in particular the move of back-row Jason Hignell into the second-row, with Joe Cooke moving up to loose-head prop. Ben Whitney dropped to the bench and was joined there by Michael Bradford who missed last week’s match. George Castledine filled the full back position, and with left wing Sion Cowdy also out injured, centre Jamie Flint went out to the wing and Ben Parker came in at inside centre.

Sheffield kicked off and Kettering responded with a return kick. George Castledine caught the ball and carried the ball back to halfway, where Kettering were penalised at the breakdown. Sheffield kicked to touch, but conspired to lose the line out, but Kettering’s attempt to clear their lines was flawed when a wild pass put heir defence under great pressure and after a short melee Sheffield scored to the left of the posts, through openside flanker, Matt Adcock. Fly-half Will Hodgson added the conversion and with just three minutes gone, Sheffield led by 7 points to nil. From the kick-off Sheffield kicked deep into Kettering territory a d Kettering made good ground up into Sheffield half, but again a wayward pass did not go to hand and was pounced on by right wing Nick Marshall, who exploded clear of the defensive pack to score under the posts. Again, Will Hodgson added the conversion and Sheffield led by 14 points to nil with barely five minutes gone.

Sheffield were able to get a further try on the board when a series of penalties took Sheffield up to Kettering’s five-metre line where once again Kettering were penalised. Scrum-half Steve Depledge took a quick tap penalty and dived over to score wide out on the right with fourteen minutes gone. Will Hodgson could not add the conversion, but the lead was out to 19 points to nil. The period that followed was somewhat dominated by Kettering, with Sheffield having to defend deep ion their 22-metre, and with the sin-binning of Jamie Flint for off-side on twenty-one minutes helped Kettering to score to the right of the posts just a minute or so later through centre Josh Plowright. Fly-half Brice Keir added the conversion and Sheffield’s lead had been reduced to 19 points to 7. Sheffield were however, soon back in the driving seat with hooker, Angus Hughes crashing over for Sheffield fourth, and bonus point try just a few minutes later. Will Hodgson converted again and the lead was out to 26 points to 7 with twenty-seven minutes gone, and from that point in time, neither side could ad to their tally before half time.

The second-half began with Sheffield looking like they had gone home, and with just three minutes played Kettering had added to their score with a try out on the right, through right wing Damien Conyard. Bruce Keir added the conversion and the lead was reduced to 12 points at 26 points to 14. Sheffield woke up and got back on track when from a lineout five metres outside Kettering’s 22-metre, the ball found centre Lewis Bowman who carved a path straight through the Kettering defence to score just to the right of the posts. Will Hodgson obliged with the successful conversion and the lead was established again at nineteen points at 33 points to 14 after 51 minutes. Sheffield were nearly able to add to the score straight from the kick-off, when a bullocking run from tight-head prop, Jake Hicklin took play deep into Kettering territory, but some indiscipline at the breakdown gave possession and a penalty to Kettering. However, Sheffield managed to steal the ball back almost immediately, but Kettering managed to prevent any score resulting. Sheffield had to wait until the sixty-fifth minute when Kettering’s replacement prop, Brett Sturgess was sent to the sin-bin deep in their own 22-metre. Sheffield elected to take a scrum from which Sean Casey powered over for the sixth try. Will Hodgson added the conversion and the leads was out to 40 points to 14. Sheffield made one last push and were soon back into Kettering territory for full-back, George Castledine, now playing in the centre, to score wide out on the left. Will Hodgson failed with the conversion, but the lead was out to 45 points to 14 with seventy- five minutes gone. Sheffield managed to close out the match and wee able to look back on a good performance and a job well done.