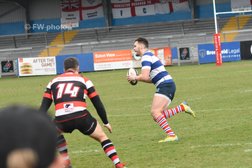 Sheffield come to the party with an excellent second half performance following a difficult journey to and late arrival at Nuneaton.

Sheffield had agreed early in the season a fixture reversal with Nuneaton, making what was originally a home fixture one away from home. Luckily this was the right decision with Sheffield’s pitch being unplayable because of the heavy rain over the previous 24 hours. The weather however, meant that the journey to Nuneaton was much disrupted with closed toads and crazy traffic, ensuring the one hour thirty-minute journey took two hours and twenty minutes. Sheffield kept faith the team that began the match at Newport last week, but brought back Steve Depledge on the bench after his unavailability for the Newport game. Significantly, second row Dave Clayden also came back into the first XV squad for the first time since the home match with Broadstreet on the 14th September.

Sheffield started brightly in wintery conditions that were far from bright with the rain continuing to fall. Sheffield managed to get control of the ball almost immediately from the kick-off and Nuneaton were penalised at a driving maul allowing fly half, Will Hodgson to kick to goal to give Sheffield a 3 point to nil lead after three minutes. Sheffield looked to be comfortable, with Nuneaton kicking much of the time when they had possession, but with Sheffield looking to drive up field on halfway, a pass from the back of the maul was intercepted by Nuneaton’s fly-half, Rickie Aley, who was able to make his ground to score under the posts. However, it would be extremely interesting to review the off-side line behind the rear most foot of the maul. Aley converted his own try and Nuneaton led by 7 points to 3 after ten minutes.

Sheffield were straight back into the match with Nuneaton being penalised again, this time for holding on at the breakdown. Will Hodgson converted again and Nuneaton’s lead was cut to 7 points to 6 after 13 minutes. Both teams were guilty of losing possession, but in the prevailing weather conditions holding on to the ball was a feat in itself. However, it was Nuneaton who managed to take control of the situation. Sheffield stole Nuneaton’s ball from a lineout and kicked for territory, but Nuneaton returned the ball with interest, when once again Rickie Aley identified a space behind Sheffield defence and a deft kick over the top toward the left wing saw the Nuneaton’s Fijian left wing, Nemani Rayabo fly down the wing, collect the ball and elude the flailing Sheffield defence to score on the left. Aley converted, with the ball going over off the post and the Nuneaton lead was out to 14 points to 6 after twenty-six minutes. The next eight or nine-minutes saw Nuneaton putting a lot of pressure on Sheffield, particularly with kicks out to the wings, but the last five minutes or so of the say Sheffield camped on Nuneaton’s try line and it looked certain that Sheffield would score. However, some very resolute defence prevented the score and right as the death, with the line almost begging to be breached, the final pass eluded the wing to fall into touch and Nuneaton went in the half time with an eight-point lead.

Tom Womack had come on after twenty minutes of the first half to replace an injured Jason Hignell, and Sheffield decided to ring some further changes at half time for the second period. Steve Depledge came on at scrum half for young Kai Ramrattan and Dave Clayden came on in the second row, with Joe Cooke moving up from second row to tight-head prop. Sheffield began to dominate the exchanges and were able negate Nuneaton’s kicking game, and as the momentum grew. Sheffield had a lineout inside their own 22, they secured the ball and Dave Clayden emerged around the back of the lineout and literally punched a very large hole in the Nuneaton defence, breaking clear to halfway. Weill Hodgson kicked deep into Nuneaton territory and a number of Nuneaton penalties allowed Sheffield to set up camp deep in Nuneaton’s 22-metre. Sheffield looked to have scored wide out on the left, but referee Callum Watson decided we had been held up over the line. However, Sheffield battled on and were rewarded when flank forward Matt Adcock crashed over near the corner. Will Hodgson’s conversion was wide of the mark, but Sheffield were right back in the mix at 14 points to 11 after fifty-three minutes.

From the kick off, Dave Clayden received and once more punched another hole in the Nuneaton defence, this time making even more ground than he had a few minutes earlier and Sheffield were right up to Nuneaton’s five metre line. Replacement scrum half Steve Depledge dummied and scored out on the right. Will Hodgson added the conversion and Sheffield led by 18 points to 14 After fifty-six minutes. Shortly after that, Nuneaton managed to create a good opportunity and Sheffield found themselves defending right back on their five-metre line, but as Nuneaton had done at the end of the first half, Sheffield dug in and defended their line just as resolutely and Nuneaton were repelled when Nuneaton knocked-on. Sheffield secured a penalty at the resulting scrum and Sheffield kicked long, but missed touch and Nuneaton kicked back. Steve Depledge returned the kick again and Sheffield chased it down and secured a penalty just inside Nuneaton’s ten-metre. Will Hodgson took the kick at goal on and converted to take Sheffield’s lead out to 21 points to 14 after sixty-three minutes. Sheffield went on to score a further penalty at another scrum just outside Nuneaton’s twenty-two metre and again Hodgson converted and the lead was 24 points to 14 after seventy minutes. Neither side managed to create anything definitive from that point on and I’m sure everyone was happy to get out of the rain.