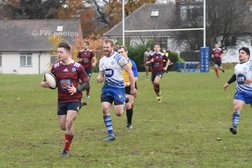 Sheffield cruise to a bonus point win to make it seven wins in a row and nine wins overall to stay second in the league.

Following last week’s travels to Paviors and a very good performance to bring home both the win and a very important bonus point. The squad lost captain and centre, Lewis Bowman to injury, which saw Nick Marshall moved from right wing to centre with Kai Ramrattan coming back into the squad on the wing. Andy Hodgson dropped out of the squad with work commitments and George Castledine remained in the starting line-up at full back. Rotation in the front row continued with Jake Hicklin and Angus Hughes dropping to the bench and Ben Whitney moving up into the starting line-up with Mike Bradford, who also returned to the squad to start at hooker.

The match had to be played on the Club’s second XV pitch as a consequence of the very heavy rain that Sheffield and the surrounding area have suffered, which left the first XV pitch very wet indeed and unplayable. Sheffield kicked off and a knock on from Peterborough Lions gave Sheffield an early scrum in Peterborough Lions territory. Sheffield were then awarded a penalty at the scrum and Will Hodgson kicked to touch for a lineout on the Peterborough Lions 22-metre line. The ball was secured and spun out to the backs, and as he does, Nick Marshall scurried through the defence to score the first try after just four minutes. Will Hodgson could not add the conversion, but Sheffield led by 5 points to nil. Sheffield battled hard, but Peterborough Lions managed to repel all advances until the seventeenth minute, when following a penalty for a high tackle on Kai Ramrattan, will Hodgson kicked to touch and from the lineout from which Sheffield set up a drive by the pack from which backrow Sean Casey powered over for a second try. Will Hodgson added the conversion and Sheffield led by 12 points to nil.

PL kicked off again, the ball was secured and moments later flanker Tom Womack emerged from the melee to run fully sixty metres to score under the posts just as he was hauled down. Again, Will Hodgson added the conversion and the lead was out to 50 points to nil after forty-nine minutes. At this point we saw Sheffield bring on Angus Hughes at Hooker and Jason Hignell at flank forward. An injury to Ben Parker saw Sheffield have to rearrange things, with Matt Adcock moving to the wing, Kai Ramrattan moving to scrum half and Steve Depledge to the centre. Sheffield took quite some more time to produce a further score. Sheffield made a break from their own half through full back George Castledine, leading to Angus Hughes being forced into touch just short of the line. Peterborough Lions managed to win their ball, but knocked on and gave Sheffield a scrum close to their try line. Sheffield secured the ball but soon moved it back to their forwards for Angus Hughes to score out on the left. Will Hodgson converted and Sheffield led by 57 points to nil after fifty-nine minutes.

Sheffield were soon back on the scoring trail when Peterborough Lions had a lineout on their own five-metre line. Dave Clayden stole the ball at the lineout and crashed over for the tenth try. Will Hodgson converted yet again and the lead was out to 64 points to nil after sixty-four-minutes. Sheffield’s final try of the match came shortly afterwards, when Steve Depledge broke through the defence before handing on the Matt Adcock. The move was brought to a halt, but illegally ands Sheffield had a penalty. Will Hodgson kicked to the corner and Dave Clayden secured ball again and Sheffield drove for the line. The referee adjudged that the drive was held up over the line and Sheffield had a five-metre scrum. Kai Ramrattan broke from the back of the scrum, dummied and went over to score himself. Will Hodgson added the conversion and the lead was 71 points to nil after 70 minutes. Sheffield were straight back on the attack and looked as if they would score again, but Peterborough Lions’ defence managed to dislodge the ball as the player crossed the line. Unfortunately, the match had to be abandoned shortly afterwards, with less than five minutes to go, when referee Peter Caunt was injured close to Peterborough Lions’ try line, but Sheffield had secured a comfortable bonus point win.

By the time we reach the Christmas and New Year break, weather and opposition permitting, we will have played 14 matches, with only 5 at home and 9 of them on the road. Therefore, in the remainder of the season the remaining 12 matches will see Sheffield at home on 8 occasions and away for only 4 matches.