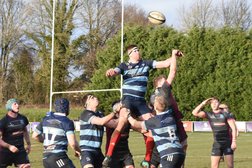 Sheffield welcomed Newport Salop to Abbeydale Park on a very windy day in the hope and belief that they could extend their lead over the visitors who are in third place in the league. Sheffield still remained without the services of fly-half, Will Hodgson and loanee, George Castledine, but saw the return of Prop forward Joe Cooke to the squad, with three forwards on the bench.

Sheffield, playing into the wind, started the match quite well, with Newport Salop giving away two quick penalties and then a break through full back Andy Hodgson. However, Newport managed to gain turnover ball on halfway and with Sheffield still in attack mode Newport Salop found a hole in their defence and roared down the left wing for winger Sam Evans to score wide out on the left after just five minutes. Full back, Benny Elliot added a very difficult conversion and the visitors led by 7 points to nil. The match remained very much in stalemate for the next thirty minutes or so, with Sheffield making some good headway in attack, but then faltering with a great many turnovers allowing Newport Salop to escape and clear any danger. The with barely four minutes to go until half time, Sheffield managed to steal Newport Salop’s line out ball close to Sheffield’s ten-metre line. Sheffield kicked over the top, but knocked on in the chase. Newport Salop won the ball at the scrum and suddenly found another hole in the Sheffield defence, this time out on the right of their attack with Full back Benny Elliot through the gap before passing on to right wing Toby Evans to score wide out on the right. Once again, Benny Elliot added the conversion from the touch line and with half time looming, Newport Salop led by 14 points to nil. Sheffield lost right wing Nick Marshall during the half to a bad shoulder injury and was replaced by Tom Womack who went into the back row with flanker Matt Adcock moving out to the wing, which did not aid the Sheffield cause.

The second half was much like the first, with Sheffield unable to hang on to the ball for long enough to penetrate the Newport Salop defence, and Newport Salop also unable to add to their tally of points and the game concluded with no further score and a great deal of disappointment for the home supporters. Let us all hope we are ready and raring to go for the home tie with Nuneaton RFC next Saturday.