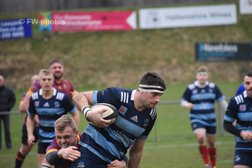 Sheffield suffered the disappointment of their second defeat of the season, losing out in a bonus point win to a well drilled and well coached team who have led the league all season and will be incredibly difficult to unseat.

Sheffield welcomed league leaders, Bournville RFC to Abbeydale Park for our re-arranged match from December when our pitches were more like a water sports centre than a rugby club. Sheffield came to the match without brothers, fly half Will Hodgson and full back Andy Hodgson. Also missing from the back division was fly half and fullback, George Castledine, who had been called back to Rotherham to sit on their bench against Darlington Mowden Park. The disruption in the backs was covered by the return of winger Sion Cowdy, with centre Ben Parker taking on the role of fly half. The forwards were to be without flank forward, and sometime winger, Matt Adcock, but Angus Hughes returned to sit on the bench.

In an often bed tempered and niggly match Sheffield erred with the very first move when the kick-off did not go ten metres and Bournville had the advantage of the scrum on halfway. However, as Bournville broke from the scrum they were penalised for taking a man out of the ball, something that featured throughout the match. Bournville stole the lineout and unceremoniously kicked for territory, something else that they did with much success through the match, mostly through their fly half, Mitch MaGahan. Kicks were regularly exchanged, but mostly to Bournville’s advantage. Not that Sheffield’s kicking was poor, Bournville’s was just better. However, Sheffield were far from being dominated out of the game, and opportunities come their way, but whether through pressure or otherwise, Sheffield made more ball handling errors than would be normal, which allowed Bournville to defend any threat that Sheffield could create. The game remained very much in stalemate until around fifteen minutes, when Sheffield were penalised at a scrum and Bournville kicked to touch on half way. From the lineout Bournville kicked deep into Sheffield’s 22-metre, where Kai Ramrattan caught safely, but decided to run rather than kick and Bournville were able once more to turn the ball over for a scrum just outside Sheffield’s 22-metre, and from there were able to get free and score wide out on the left through full back Owen Williams. Mitch MaGahan added the conversion and the visitors had the lead at 7 points to nil with 19 minutes gone.

From the restart, Sheffield secured the ball and were on the attack and were awarded a penalty just outside Bournville’s 22-metre. Sheffield secured a lineout just five metre out, but knocked-on at the lineout, allowing Bournville once more to clear their lines. Then several minutes of running rugby broke out which eventually led to a Sheffield s scrum. Sheffield were then awarded a penalty at the scrum and as the scrum broke up, Bournville loose-head prop decided he would wrestle Sheffield’s Joe Cooke to the ground, which obviously led to a melee. The referee made one of his more bizarre decisions, and there were many, when he decided to yellow card both players. Sheffield kicked to touch, won the lineout and broke out with Jamie Flint putting Lewis Bowman clear through the Bournville defence. Once again, our referee decided this pass was forward, despite the fact it travelled less than a foot and he was totally unsighted having been left behind at the lineout. Bournville once again went for territory with a kick, but Sheffield secured possession and manufactured another attack which led to even bizarre events, when Bournville’s 8 took it upon himself the go on the rampage throwing punches, several of which landed on Sheffield players faces. Now. I always believed that deliberate foul play with contact to the face was a straight red card, but not in this game, a nice soft yellow. Sheffield went to touch again and soon secured another penalty. Scrum half Steve Depledge converted a penalty and Bournville’s lead was brought down to 7 points to three after thirty-three minutes. Sheffield were awarded another penalty just as the half came to an end, but the kick drifted just to the left of the posts and the half finished with Bournville leading by 7 points to 3.

However, the second half saw Bournville more dominant, and they moved further ahead after just five minutes of the half with a second try from a driving maul, scored by second row forward Sam Hetherington. Mitch MaGahan added the conversion to take the lead out to 14 points to 3. Sheffield battled hard and kept Bournville at bay until the fourth quarter, when Bournville’s scrum half, Ben Tibbets broke free and was only pulled down on the five-metre by Kai Ramrattan, but was allowed to go on to score in the right corner. The conversion was missed, but the lead was out to 19 points to three after sixty-two minutes. Seven minutes later, Dom Parsons stole Bournville’s lineout ball, but somehow Bournville managed to turn it back over and Bournville’s fly half broke through the Sheffield defence and Sheffield were penalised at the resulting breakdown. Bournville kicked to the corner, but Sheffield managed to defend this attack and turned the ball over when Bournville were forced into touch. Sheffield had a defensive lineout just ten metres out. However, the ball was lost and Bournville mounted yet another attack through the forwards, before replacement wing Mickey Ho was able to go over wide out on the left for the bonus point try. The conversion was missed again, but Bournville now led by 24 points to 3 after seventy-one minutes. Sheffield probably just had the better of the last ten minutes, but two penalty kicks to touch were missed and the momentum swung back to the visitors who were more than happy to go home with a bonus point win and a seventeen-point lead at the top of the league.