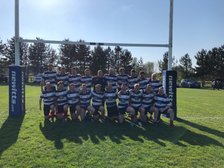 Strong start for the Mighty 2's

The strength in depth this year has been evident during a competitive pre-season at Sheffield. Today’s team saw a mixture of some exciting new talent integrated with some familiar older and grumpier members of the squad. No doubt we will need this strength in depth throughout the long season and as the inevitable injuries take their toll, there is certainly plenty of talent in the squad this year to cause some selection headaches. Unfortunately Cleckheaton only turned up with 13 players, disappointing for a club who have traditionally supplied strong opposition over the years. We obliged and lent them two of our subs.

Following a Cleckheaton kick off, Sheffield claimed the ball well and went through the phases, showing good supporting lines and playing at a pace and intensity in attack that Cleckheaton struggled to cope with. Good forward pressure enabled quick ball for the backs and Joe Mchale went over in the corner for the first of his two tries, conversion missed. Cleckheaton kicked off and again our pack secured possession and made good inroads into the defence, the ball carrying of Cook, Salt and Fagan working well before the backs once more used the space for another Sheffield score out wide.

Sheffield continued to dominate all facets of play and the scores kept coming, tries from Womack, Hodgey (Jnr) and a brace from Will Fairclough ensuring the scoreboard moved on at a point a minute. The half back pairing of Hodgey and Brad were bossing the game, the execution and accuracy from all players was a real positive with all chances taken.

Clearly it was a difficult game for Cleckheaton, they carried well and were direct with their carries off 9, testing our defensive line for 10 minutes mid-way through the first half. The backrow stalwarts of Carrington and Adders slowed the ball down and made some good hits. JC even went on one of his rampaging head butting runs only to fall over his steel toe capped size 12’s. The ball was recycled and the chance finished off again out wide.

Half time - 40 nil. Que Al Cotton’s half time team talk to focus on maintaining possession and keeping them scoreless. Subs were made and Sheff were eager to maintain the pressure on the opposition.

The second half didn’t quite match the quality of the first, the referee (whilst understandable) was clearly hot on the heels of any Sheffield perceived indiscretion. Cleckheaton battled hard and at one stage looked like they would breach our line, however a good strong tackle dislodged the ball and we cleared our lines. Further tries followed as the game broke up and gaps appeared around the Cleckheaton pack, two tries for no.8 Ben Hopkinson showing good strength on both occasions. Adders also blasting through a couple of tackles to score a fine try. The scrummaging of Whitney, Owens and Cook was relentless, well supported by the back 5 and the subs who all made a positive impact. The lineout is an area than needs some work but showed signs of improvement as the game wore on, Dave Owens getting on the score sheet from a strong catch and drive. The backs were clinical and ruthlessly exposed any gaps out wide and through the middle, slick handling was evident in order to put away the dangerous outside backs who finished well.

All in all a good win, with plenty of competition across all teams training attendance will be key. Harrogate at home next week in the league will be a good benchmark as to where this team is and what we can achieve this season.