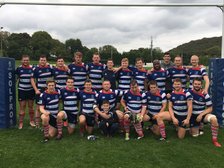 On what felt like the first winters game and at the earlier timed kick offs with the clocks going back a very much depleted Sheffield team made the trip north with 17 players, due to the shortage of props in the club, none of which would be considered props. Making hard work of any game stayed true for this Saturday. But the lack of a solid scrum platform which has let this team grab the game by the scruff of the neck was clearly missing today!

With the home side able to grab a hold of the game at the start and almost exploiting our clear lack of game time in recent weeks Yarnbury seemed to be that little bit sharper around the pitch! The first few rucks seemed to be all in order and like any other game with neither team willing to budge. However with some clever play by the Yarnbury 10 a kick threw to a back three who hadn’t much game time together lead to some miscommunication and causing a two on one for a simple try for the home side

With the backs against the walls for the travelers and Yarnbury's tales up after scoring the game took its lul quite early with the only excitement again coming from a Yarnbury attack off the center field. The 10 kicked what can only be discribed as a hail mary of a kick, nothing on outside him as the sheffield 12(Ed Anglin) perfectly lined up his opposing number, sadly the Yarnbury 10 spotted this and went of the kick through, with the ball bobbling along the Sheffiled full back (Hez) made great work to get back and over the try line flicking the ball from the on coming Yarnbury grasp to give the ball to another Yarnbury player who couldn’t keep hold of it and lost it, by foot, into the hand of Ali Woomack, another man who made great runs to get back and support his full back! Thankful where sheffield of a ref who knew the laws on a day like today in that he was able to award a perfectly timed 22 drop out for the away team. Which after some hard lines of running by all players lead to a beautifully timed pass into the hands of the new fastest backrow in the country Adders who at 22 meters out from the line was able to brake the line and score a well needed and deserved try.

The next line of play and the whole way through until half time was cut throat, with both teams coughing up simple errors and uncharacteristic of the Sheffield teams form as of late the penalty count was favouring the home side and the scoreboard ticking over in their favour also.

With the second half coming up and some well timed changes it was Sheffield making the better start with the majority of the posession, sadly the errors of the first half managed to come back out in the second half and cost us yet another penalty, With neither teams lineouts working particularly well it was the obvious soloution to take a jab at the sticks, and that is what Yarnbury did. After another penalty for not entering through the gate it was now looking like a very hard up hill battle for the Sheffield 2s.

Thankfully, at this point the Sheffield boys decided to become men, having made a decision to grow a pair it seemed to all click for them. With Sheffield taking control of their own line outs and no longer having the issue with the lifters it soon became the main attacking platform. WithYarnbury being the lighter pack they where not willing to challange the might of the Sheffield maul which caught our forwards out twice in the game. However Yarnburys only option was to kick for touch and luckily the Sheffield line out was on form! At last!!

The game seemed to be going sheffields way however, they could notbreak the try line! With the majority of the rugby being played in the Yarnbury half. A scrum inside the Yarnbury 22 was all that the visitors needed to finally take the lead for the first time in the entire game, With a Yarnbury put in for an uncontested scrum it was easy for the 7 Adders and the 9 at the time Will Hodgeson to get up fast and effectively on the 10 who paniced and tried to run through, the two players, only to be met by a third member of the Sheffield team Campbell to assist in the final put down of the Yarnbury10. With the entire pack having to run back and attempt to clear a ruck on the back foot the ball popped out and was secured by a Sheffield man who carried the ball to with in a meter of the try line. With a very quick clear out and sheffield on the front foot every man woman and child knew what was coming. Joe Carrington with force! The man took the ball perfectly and at pace and dropped his head crashing over the line just outside the posts. A beautiful conversion meant Sheffield took the lead for the first time with 5 minutes to go.

With only one thing on every players mind on that Sheffield team of see it out the Yarnbury 10 was clearly rattled and failed to make his kick travel that wonderful 10 yards. Scrum Sheffield on the half way line. With the ball being secured and sheffield getting another penalty from the open play it was up the line and secure. We all knew what was coming, Maul and time waste. However still the Yarnbury pack decided not to bite into this manoeuvre. They stood off, but with some wonderful chat and variations of french Cam Bane rose to take a beautiful ball before no maul being set up allowed for a massive gap in the Yarnbury line and a 30 meter brake from a man on a mission. With that and a few more phases to hold the ball the game ended and Sheffield had that all important W!

After a poor performance the Sheffield came away with a win and just. The uncontested scrums and lack of game time as a team was clearly evident in the sheffield team who are thankfully still sitting atop of the table. With another away game next week it will be interesting to see how this team regroups and regathers. Is a loss on the way or can they learn from the poor games and build on that!

A final Score of 17-16 to the traveling boys seems to suggest that the game was close, but in actual fact it was just a poor game played by two very average teams on the day! All in all Sheffield will need to re-evaluate themselves and be better for the next run of games!

Report this week by Tadhg