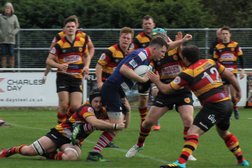 Tough weekend for a much changed Sheff team...

In a week where unavailability to both the 1st team and 2nd team really hampered the sides, this game was always going to provide a huge challenge. The team called up Gaz Morley from semi-retirement, Joe McHale slotted into the centres and the pack was bolstered by the return of “almost-veteran” Andy ‘Danish’ Enevoldson. Many guys played out of position but did a sterling job.

On a fantastic looking pitch, the game started with Sheffield putting phases together, only silly handling errors preventing inevitable points. Unfortunately, Harrogate scored a try against the run of play, with their 9 going himself off the back of the maul. Sheffield continued to apply pressure and once again, a simple mistake resulted in a freak interception and an additional 7 points to Harrogate.

Several phases later and the boys in blue gained a penalty on the Harrogate 22. A kick to the corner and a “well-constructed” and “perfectly planned” lineout led to Stephen ‘Steg’ Hare scoring in the corner. Elliot Fisher added the extras from out wide but due to the linesman not being behind the posts, the kick was not awarded.

The half finished with Harrogate scoring a questionable penalty try after pressure on the Sheffield scrum. Sheff 5-21 Harrogate.

The second half started well and all substitutes made excellent impact after coming on. Miles, DeNormville, Owens and Collar all having excellent performances. After a period of stalemate, Harrogate scored out wide but missed the kick.

Sheffield came back into the game and after some meters gained by Zed Richards out wide and Charlie Mason plus many of the forwards, Owens touched the ball down on the line; this started a huge surge from Sheffield with a quarter of the game left to play. Regrettably, Stephen Hare injured his neck and the match was finished with 10 minutes left to play. Sheffield were on top at that point so it could have been interesting.

The score line does not reflect what was an improved performance for Sheffield against a very strong Harrogate team. Most importantly, however, we all wish Steg a speedy recovery from his injury and hope to see him back on the pitch very soon!

Lots to build on for the Sheff boys. Driffield visit Abbeydale this Saturday, look out for the Match Preview later this week.