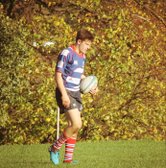 Sheffield will rue missed opportunities but also be happy with hard-earned away points...

Sheffield 2s made another long journey, to Billingham this time out, hoping to stamp their mark in the northern pilot league after a tough start. Things didn’t look good when neither team could agree on a start time, but after meeting in the middle both teams got underway at the unusual 2:20pm. Sheffield, playing into the wind, started the brighter when after some promising passages of play the ball was shipped wide to Zed Richards, who was held up a foot from the line. A number of close phases later Elliot Fisher managed to find the gap close to the ruck. 5-0 Sheffield.

Sheffield were then unlucky to find themselves down to 14 men, Ben Parker adjudged to be not rolling away from a ruck after a quick Billingham break, a decision still contested by Ben! Billingham made the extra man count when they put the penalty into the corner and after a period of pressure worked their way over the line. Sheffield fortunate for the score to remain 12-12 as Billingham spurned two attempts at goal during the run-in to half time.

Some strong words and a feeling of unfinished business at half time showed, as again, Sheffield started the second half much the stronger team. Plenty of piercing kicks from Ben Parker and hard hits from Stephen Hare saw Sheffield have the better of the play. But for all the positives, there wasn’t anything to show for it other than a number of missed opportunities and penalties conceded in key areas. What it needed was a spark, which was delivered on the hour mark by a knock on from Billingham, to which everyone stopped, except Elliot Fisher, kicking the ball through from half way. Despite his hardest efforts to kick the ball dead, he managed to collect the ball and dot down close to the sticks. Parker tidying the extras.

This looked to be it, Sheffield dominating again, but a number of costly penalties allowed Billingham to regain a foothold in the game. They camped on the line for the last 10 mins, and despite some heroic defence from Stephen Hare, Ed Anglin and too many others to name, they slipped through to dot down with the last play. The conversion followed to tie the game at 19–19

A good result on the road against a tough side, although the bitter taste of what should have been lingering in the mouths of the 2nd XV squad.