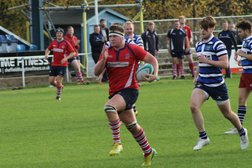 The 2s fight to victory in blustery conditions...

Strong winds and a Sheffield 2nd XV keen to put their league campaign back on track greeted visitors Driffield at Abbeydale. The return of Archie Crapper to the 2nd row as well as some new faces in Alvey at Hooker and Hignel on the bench saw Sheffield’s pack strengthened. The backline saw changes with Flint at 13 and Parker at 10, pushing Chandler to 12.

Driffield had the responsibility of getting the game started, kicking off towards the clubhouse into a strong wind blowing almost directly down the pitch. The game began in a relatively stop-start fashion, a trend that would continue for the full 80 minutes. Sheffield came out on top in the 1st quarter of the game making a number of breaks out wide and eventually scoring first. A blind side move saw Zed beating a number of players to finish in the corner.

The score at 7 – 0, Sheffield pressed again into the Driffield half with Charlie Mason making a great carry from outside the Driffield 22 to score underneath the posts. At 14 – 0 up and the wind at their backs Sheffield seemed to take their foot off the pedal.

Two yellow cards, one for persistent offences and another for an attempted kick at a player meant Driffield were reduced to 13 men. This seemed to spur Driffield into action, carrying well around the break down as they managed to make ground into the Sheffield half. Heightened by Sheffield’s indiscipline Driffield were able to score close to the Sheffield posts.

At 14 – 7 Sheffield returned from the kick off and managed to again build some pressure in the Driffield half. Quick thinking, quick feet and a quick tap from a penalty saw Elliott “mines a sambucca” Fisher race in from 30m out, through the retreating Driffield defensive line. Scoring underneath the posts Sheffield were able to take the score to 21 – 7.

Driffield caught Sheffield sleeping from the kick off for a 2nd time and were able to win the ball back. Panicking, Sheffield gave away a number of quick penalties allowing Driffield to kick to the corner. Scoring again Driffield took the score to 21 – 12 at half time.

Both teams were reduced to 14 men for 10 minutes after what can only be described as two separate acts of grievous bodily harm. The Sheffield 2nd row and Driffield number 9, both pushing an opponent in the chest during some minor handbags. Their vicious acts saw them both dispatched to the sin bin within 2 minutes of each other.

Strong carries from Flint and breaks from the illusive Chandler saw Sheffield maintain possession well progressing up the pitch. Breaking into the Driffield 22 some quick hands saw Miles Langdale valiantly push his way through the Driffield cover defence like an irresistible force of nature, felling the corner flag as he fought his way over the line. Unable to convert the game ended 26 – 12 to Sheffield.

Sheffield will look to continue their winning run next week against West Leeds at Abbeydale.