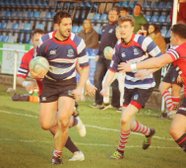 A disappointing afternoon for the 2nd XV as errors cost them the win...

It was a frustrating afternoon for Sheffield’s 2nd XV, with far too many errors and a slow start inevitably letting the boys down. Losing Ali Womack in the warm up and Mitch O’Brien in the first minute of the game didn’t do much to help the lads either. However, Rory Duncan stepped up onto the wing and squad manager Rob Holland reluctantly put in a 79-minute stint at 12.

Sheffield received the kick-off, and following a well-executed exit, Phoenix scored by means of a maul from the resulting lineout, adding the extras. Good pressure on the return kick-off from Jack Hawley allowed Sheffield to steal possession. Sheffield’s first real attacking set was scrappy, with some misdirected passes, but ultimately led to a break down the left flank by Andy Hodgson. A variety of scrappy play from both sides then lead to a Phoenix 22 drop-out, which they cheekily kicked short to themselves before Sheffield were set. This was to no avail however, as before Phoenix could make any headway down the wing, Joe Carrington smashed the Phoenix 14 into touch.

Then began another series of scrappy play by both teams, which ended with a well weighted grubber from Hodgson, and a fly hack from Duncan putting Elliott Fisher over the line for his first of the afternoon, with Ben Parker converting to level the scores.

Yet again another patch of errors from both teams made the game rather poor for the spectators. What was possibly the longest string of phases in the whole game by either team ended in Phoenix scoring through yet another maul, which was again, converted.

The game became more pleasing to the eye after this, opening up to more flowing attack from Sheffield. A well-structured back line got the ball wide to Zed Richards who sent his opposite man for a hot dog, before throwing a one handed offload forward to Fisher who would have been in to score. A couple of errors and ill-discipline from Sheffield gave Phoenix some territory which they had lacked since their last score. Multiple fumbles from a phoenix lineout close to the Sheffield line resulted in Phoenix scoring their third try of the game, again from short range, with the extras added. After some end to end play, Phoenix then scored a penalty to add to their tally. This would have been the last notable play from the first half if it wasn’t for a break down the right hand side, seeing Hawley and Richards combine after a perfectly weighted miss-pass from Parker. This as one would expect following the earlier errors in the game, ended with a knock-on.

The second half started much cleaner than the first, with strong defence from Gaz Morley and Sam Sumner on display. Sheffield’s resilience really showed as they only toucheAC d the ball 4 times in the first 10 minutes of the second half, yet barely conceded any field position. Sheffield’s first string of possession saw Morley make a 35m break down the right hand side, yet as per the trend of the first half, the ball was lost before anything could come of it.

It was then Sheffield’s turn to put the pressure on Phoenix, with strong carries from Morley and Dave Owens. A well weighted kick from Hodgson earned Sheffield a scrum on the Phoenix 5m line, following some sharp hands from a kick return. After continued pressure on the Phoenix line, Sheffield received a penalty. Off the line out they took one carry, and then fast hands from Parker and Holland gave Hodgson and Richards a 2v1 on the right hand side. Hodgson drew his man perfectly, releasing Richards on the outside, who made light work of the trailing fullback with a swift step inside to give Sheffield their second try of the game. For some reason no tee was available, thus Parker was unable to convert.

Shortly after the kick return, Michael Bradford made a 25m break out of nowhere in the midfield. This allowed some fast thinking from Fisher and a surprisingly athletic sidestep from Carrington meant that he found himself through a gap. Perhaps it was the unfamiliar territory he was in that confused him, leading to the odd decision not to pass to Richards, who was unmarked on the wing. The ground gained by Carrington’s storming run was quickly lost, as during the next phase, the ball hit the deck, leading to a breakaway converted try for Phoenix against the run of play.

Sheffield showed strong defence from the kick off, again with Morley’s efforts worth a mention. A dark cloud then drifted over what had been a reasonably well disciplined game when an act of foul play at the base of a ruck by Phoenix’s No 22 resulted in him receiving his marching orders. This gave Sheffield not only the numerical advantage for the remainder of the game, but also it appeared to kick them into the next gear. The lineout from the penalty evoked what in comparison to the rest of the game seemed like a minor miracle. Not one, but two offloads in a row from Owens and Bradford let Fisher loose through a gap, where he shrugged off a would-be defender to score his second of the game. Parker added the extras with a drop kick.

For the next few minutes, the game seemed to descend back to the sloppiness of the first half, with the only positive being the much improved aggression and desire shown by Sheffield. Speaking of aggression, Parker outmuscled one of the Phoenix players, pushing him back 10 yards and forcing a turnover. This sparked the move that gave Fisher his hat trick. Great link up play from Morley and Hawley lead to Phoenix knocking the ball down, which was when Fisher pounced. Seemingly in the right place at the right time again, Fisher kicked the ball along the ground, bouncing off a player straight into his arms. Then with a beautiful pirouette and a quick turn of pace, Fisher ran in for a 35 metre try under the sticks, which Hodgson converted. This ended up as the final scoring play of the game as some hard graft in defence by Archie Crapper and John Watson in the dying moments ensured no further score for the visitors, but Sheffield were also unable to find the vital score which would have given them the win.