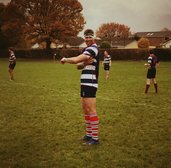 The 3rd XV were back in action over the weekend, making the short trip to local rivals Dronfield, to take on their 2nd XV in what was set to be one of the toughest tests of the year for the Sheff boys.

A strong squad travelled, with 2nd team regulars Joe Carrington and Brad Chandler starting, along with former 1st XV Captain Dom Parsons making his 3s debut from the bench, as he returned from his 12 week ban.

Sheffield started very brightly, controlling possession and making in-roads with some strong forward carries, Carrington, Pat Scotton and John Massey really coming to the fore. With the hits also flying in when Dronfield saw the ball.

The initial breakthrough was made by Brad Chandler, who, following a number of strong phases from the pack, was able to ghost through an already stretched defence and dot down just left of the sticks. Conversion added.

Sheffield continued to exert their dominance and were rewarded when Chandler once again was able to find a weak shoulder and barge his way to the line. 12-0 to Sheff.

This prompted a Dronfield fightback and they were soon on the scoreboard. Some neat offloading saw them make meters and eventually find the whitewash, their kicker was on target and Dronny were back in the game.

This continued and when Dronfield got over again, the successful conversion meant that they took the lead. 14-12.

Sheffield were not deterred, however, and with Carrington to the fore, they were able to stamp their forward authority on the game. This led to some frantic scramble defence from Dronfield, who withheld the surge in part, until the ball found a way to Rob Anderson who streaked over in the corner. HT and Sheffield led 17-14.

With a view to securing further set-piece ball, Sheffield introduced former Captain Dom Parsons at the start of the second half; this had the desired effect as Sheffield began to once more dominate possession.

With the backline gaining regular ball and looking increasingly dangerous, with Chandler, Vinny Griffiths and Jack Ward all gaining ground every time they saw the ball. A particular highlight seeing Vinny counter-attack from a kick return with a jinking, weaving sortie deep into Dronfield territory.
The home defence had to give and it was Rob Anderson again who found a way over to stretch Sheffield’s lead to 22-14.

With time wearing thin, Sheffield were happy to see out the game with composure and control, and with Dronfield throwing the kitchen sink at it were outstanding in defence.

The final whistle blew with no further score, and the 3rd XV claimed their 10th win on the bounce!