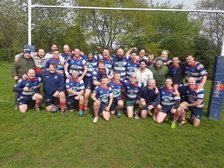 The Sheff boys rack up a score to remember...

Sheffield went into the fixture expecting a tough match as the two teams had met three weeks previously in a friendly which resulted in a 21-17 victory. Sheffield fielded a strong side with four Sheffield tigers veterans filling in spaces on the bench due to unavailability to members of the Sheffield third team.

The points piled up in the first half with six tries scored through Ben Broomhead, Miles Bates and Brad Sanders all scoring two each; Captain Jack Ward scoring four conversions against the wind in terrible conditions.

Going into the second half Sheffield knew they had to pile on the pressure, with a bonus point win already in the bag they knew more points in the win would pay dividends in their aim to win the league at the end of the season.

Sheffield scored two early tries from the kick off with great hands from both forwards and backs, feeding both wingers Rob Adgie and Vinny Grifths to score. The try-fest carried on with both second rows also scoring, special mention goes to Richard Hague who ran 50 meters in to score under the posts. Simon Miles scored on his return from two seasons out. Usual 2s player Luke DeNormanville managed to find himself on the score sheet, running through four helpless Stocksbridge defenders. That left Miles Bates and Ben Broomhead as the last two scorers completing their hatricks.

Overall a great game, putting out a great message to stronger sides in the league, Sheffield only conceding one try with the match finishing 85-5. 13 tries for, 1 Try against. We hope that the success of the last six unbeaten games can be taken into the coming fixture against the History Society, which takes place on the 20th October.