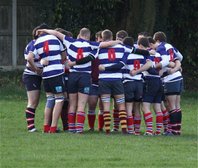 Sheffield’s 3rd XV played host to Sheffield History society in what turned out to be a very tough and gripping game.

Sheffield conceded two early tries in the first fifteen minutes, making the score 12-0, with Vinny Griffith managing to charge down a conversion straight in front of the posts. Sheffield managed to get on the scoresheet with a penalty, to remain firmly in the contest, through the boot of Jonny Shaw. Although, not long after this History Society again managed to get on the score board with another try!

Sheffield went into the second half with the score line being 6-17. Knowing they had to dig deep and push hard for the win. With many attacking plays going through both forwards and backs, the History Societies’ defence held strong, with Sheffield eventually getting their first try of the match when 9 Ben Broomhead decided to pick and go from the base of a ruck to dot the ball down under the posts. This made the score 13-17, with a quarter of the match to play. A few injuries forced Sheffield to empty the bench, with both teams showing a great deal of will in defence. Sheffield managed to force a five-metre scrum with ten minutes remaining, Flanker/Prop/Scrum-Half Pat Scotton noticing a blindside overlap and unleashing Ben Broomhead and Steve Connelly, resulting in Steve Connelly not needing the extra man and crashing over himself. Jonny Shaw was unfortunately unable to get the extras. Making the score a tight 18-17.

With Seven minutes remaining and just a single point in the match, Sheffield knew they had to dig deep to keep the lead. With Stellar performances from Ben Collar, Ben Hall, Danny Kenny and Miles Bates they managed to keep the ball moving up the field, resulting in Ben Hall making a break from the half way line to deep into the History Society 22. Following three phases through the forwards, Rich Warley managed to break through and score under the posts, despite the attention of two History Society forwards trying to stop him in his tracks! A special mention indeed to Rich, who was playing his first game of the season! Jonny Shaw obliged with the extras, giving Sheffield a 25-17 win.

This result added to Sheffield’s remarkable streak, completing their seventh win in a row and securing their top of the league status. Sheffield have another tough fixture in the pipeline, welcoming Dinnigton’s 2nd XV to the Abbeydale Sports ground this coming Saturday, 27th October.

The squad will surely approach this game with supreme confidence, however, with their form both tantalising and undeniable. They will feel that the real test posed by The History Society will do nothing but strengthen their resolve and resilience moving forward.

Another excellent result for the Mighty Threes!