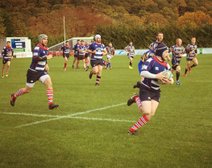 The mighty 3s romp their way to an eighth victory on the spin...

On a chilly Saturday afternoon, an eager Sheffield third team took to the first team pitch to face off against a strong Dinnington thirds. Sheffield unfortunately had a few late absentees, due to sand in intimate places.

The game began as expected, a real war of attrition with the entire half being played in the middle of the pitch. Sheffield looked the stronger but couldn’t gain any significant territory. The first score came from some great vision by captain Jack Ward. He spotted an undermanned blind side and slipped a quick miss pass to Sheffield Colt Ben, putting him through to score on debut. The second try came from some excellent wrestling play by the other young Ben, stealing the ball off some huge bloke and cantering in under the posts, some awful goal kicking from Jack restricted the Sheffield score, however, and with half time looming Dinnington managed to penetrate the line. The score at the break was 12-7.

Second half came, so did the sun, and all hell broke loose from the kick off. Dr Evil Lookalike Pricey taking it on the full, throwing a worldie of a pass to consistent scorer Ben Broomhead and off he went, galloping to the try line as Sheffield’s lead grew. The 3s dominating back play at this stage saw Steve C and Ed “Always on Time” Anglin score quick successive tries. Another Colt on debut, Max, went and scored a great break away try. Then a moment to treasure; returning from a long-term injury at the ripe old age of 67, Joely came hobbling onto the pitch to become SRUFC’s oldest ever player. He didn’t do a lot but Hey-Ho, they scored we won.

So, the incredible 3s keep marching on and now find themselves on an eight game winning run. Unbelievable scenes! A special mention must also go to three Colts, making senior debuts and all getting on the scoreboard. Well done boys!