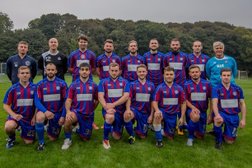 Bankers Ought to have won away at Oughtibridge.

Away point could be pivotal at potential promotion rivals!

The return of key players gave the manager a selection headache, with Miles Ridall, Phil Miskill, Dan Beech and Chris Tunstall all returning to the team as well as captain Michael Russell.

It was a match that looked to be Bankers biggest test so far but also a chance to make a real statement to the league.

Bankers began the game on the back foot as they looked slow and sluggish. Oughtibridge were moving the ball well and enjoying possession in the Bankers half. Their pressure resulted in a break through, a ball in behind the back four found the Oughtibridge striker who lobbed the Bankers keeper.

The goal seemed to wake Bankers up and they came out all guns blazing from the kick off. Dan Beech enjoyed the ball on the left wing and the Bankers were back to their passing game and dominating. The equaliser came from a sweet pass from Alex Coulton who found Dan Beech on the left wing, the winger beat his man and fizzed in a low cross, which was met brillaintly by CM Miles RIddall.

Bankers continued to dominate, the midfield dominated and Tunstall was pivotal in linking up the play. Ridall was switching the ball from deep and Kokot was covering the pitch well and stopping the opposition from playing. Beech and Colton were a constant threat on the wings.

The back four looked commanding and didn’t look threated, the half ended and the Bankers went into the break the better team.

Unusually for the Bankers, they came out the second half the better team and took the lead, a fantastic cross from right back Jack Joyce found the head of Robert Jerrison, who hammered home and celebrated in usual Alan Shearer style.

After going ahead, Bankers sat back which invited a lot of Oughtibrige pressure. They had numerous half chances before they had a shot inside the box which was on target. Michael Russell blocked the shot on the line, unfortunately with his hand. The referee pointed to the spot. The Oughtibridge player stepped up and fired the penalty straight down the middle, leaving Andy Taylor no chance of saving it as he dove to his left.

Oughtibridge continued to apply the pressure, and the Bankers huffed, puffed and stood firm before finally growing back into the game.

Miles Riddall came off as he received a knock and Jo Robinson slotted in at left back pushing Michael Russel back into his favoured centre midfield position. Jack Roe came on for Alex Coulton and Robert Jerrison was replaced by Jack Sutton.

The introduction of Jack Roe seemed to pay dividends immediately as he latched onto a neat Chris Tunstall through ball and slotted home, only for the referee to bring it back for an extremely dubious offside.

Oughtibride fought back and their striker got the ball in between Joe Jerrison and Jo Robinson, the left back recovered extremely well making the tackle of the game to stop the attack.

An away point on the board which could prove vital come the end of the season, still unbeaten and still plenty of room for improvement.