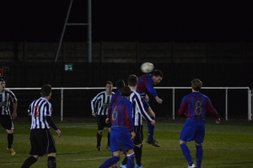 Bankers travelled to Penistone Church FC to play their reserves side under the floodlights, in what was a game of two halves.

With a number of changes to the squad, the team was as followed:

The first half was a tight affair. Penistone probably had the larger amount of possession, but Bankers created the better chances. Sam Dean raced into the area for a half chance and struck it low with his left foot but the keeper saved it. Joe Jerrison struck a volley following a corner but missed the target and hit a spectator behind the goal instead. Sami Eric also tried to make space for himself in and around Penistone’s area but was blocked off a couple of times.

Bankers were left to rue not taking their chances as Penistone bagged the first goal late on in the first half. The ball was won just outside Bankers area and struck hard to the near post. Keeper Sam managed to get a hand to it but could not keep it out. 1-0 to Penistone.

The second half did not go as well as the first for Bankers. Penistone began to play more on the counter attack as Bankers pushed forward, and this seemed to suit them well. Penistone went 2-0 up when their striker headed into the roof of the net following a corner. Shortly after Mike Elliott replaced Lewis Robinson at centre half.

Not long after bagging their second goal, Penistone scored another via a penalty. Joe Jerrison went to block a cross and the ball struck his hand and the penalty was given. An unlucky one for Joe. Penistone converted the penalty to make it 3-0.

Manager Risho made his final two changes, bringing on Matt Taylor for Jo Robinson at left back and Joe Lodge for Philip Sharpe on the left side of midfield.

Bankers looked to press more, but this created more counter attacking opportunities for Penistone, with their number 11 looking to get in behind the defence whenever he could. One of these counter attacks provided a fourth goal, as the number 11 crossed in low for the onrushing midfielder to tap the ball in from close range. 4-0 to Penistone.

Bankers continued to press, Mikey Russell found himself one on one with the keeper but the goaly made himself big and blocked the shot. Sami Eric also created a shooting opportunity for himself as he showed good skill to turn his defender inside the area, but his shot found the side netting.

With the game fizzling out, Penistone found time to bag the fifth and final goal. A free kick from the 40 yards out came in towards the left side of the area. A Bankers player got a touch onto it but the ball rebounded straight to an unmarked Penistone player who then drilled it into Bankers net.

The match finished 5-0 to Penistone and breaks Bankers run of having scored in every game of 2015 so far. Despite the score line, it was a good effort from the lads and the team can take some heart from aspects of the performance.

Bankers will be hosting top of the league North Gawber Colliery this Saturday at 3pm.

Man of the match: Richard Bartimote