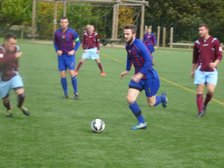 All square on Bankers’ last game of the season

Bankers drew their final league game in what could be a crucial point in the bid to stay in Division One.

Manager Ryan “Risho” Griffiths walked into the changing room to address his team for the last time this season. His debut season as First team manager has had its ups and downs, which could be easily told by the fact that the Gaffer looks to have aged significantly since last August; with a few more grey hairs than there used to be.

Risho named his team; with a new formation, the line-up was as followed:

The first half saw a slow start to the game. Bankers were settling into the new formation, whilst High Green were slow to attack the Bankers’ goal. Bankers were finding the most joy down the right hand side, with James Nield-Smith and Sam Dean attacking their full back.

Sam Dean had the first chance of the match when he was played through by fellow striker James Fletcher. Sam struck it first time but the keeper was able to pull off the save. James Fletcher had an opportunity himself soon after, when he found himself one on one with the keeper. Fletch chested the ball down but the onrushing goaly made himself big and pulled off a good save.

High Green created a good chance to take the lead, but keeper Simmo pulled off a fine stop down low to his left hand side.

Bankers took the lead not long before half time. James Nield-Smith closed down High Green’s full back and stole the ball off him. James showed good composure to play a low cross into the box for James Fletcher to latch onto and strike home with a one touch finish. 1-0 to Bankers. The first half finished with that score line.

The second half saw more chances and goals when compared to the first. Bankers looked comfortable in the opening stages, but High Green had a purple patch and managed to pull two goals back to take the lead midway through the half.

Subs were made with Jack Joyce replacing Sam Dean, Matt Taylor replacing James Nield-Smith and Risho replacing Lewis Robinson. Bankers began to press high up the field to find that equalising goal. Matt Taylor was finding a lot of space on the right hand side, Joe Jerrison was pushing further up field and James Fletcher was seeing a lot more of the ball.

A chance fell to Jack Roe, who had moved up front, when the ball spun through High Green’s centre halves. However, one of the defenders was able to recover and block Rolo’s effort.

Bankers did pull a goal back with a piece of play that started from defence to attack. Jo Robinson laid the ball down the right to Matt Taylor; Taylor cut inside and slotted the ball to James Fletcher just inside the area. Fletcher used his trademark shimmies in order to find space to cut the ball across the six yard box; and luckily Joe Jerrison had rushed in and was on cue for a simple tap in. 2-2.

Bankers had three more chances to put the game to bed before the final whistle. Captain fantastic Mikey Russell saw an effort with the outside of his boot skim wide. Jack Roe had an effort blocked after Matt Taylor played the ball across to him on the edge of the six yard area. Another Matt Taylor cut back found James Fletcher around 8 yards out, but his effort smashed the post.

The final whistle was blown and Bankers had drawn the game. Although the team were a little bit disappointed not to have won the game, they can take heart from the way they came back as a team.

This point could prove to be crucial in avoiding the bottom three places in the league. AFC Dronfield, tied on points with Sheffield Bankers, travel to the Division One champions North Gawber Colliery this Friday for their last game of the season.

Manager’s man of the match: Lewis Robinson (no joke).

On a whole, the season can be taken as a positive. There have been some good new additions to the squad plus the team spirit and camaraderie is high. There are things to improve on for next season, which begins with training, which continues on Tuesdays at Goodwin Sports Centre at 7pm.

Congratulations to James Fletcher for winning the Golden Boot award this season.

Also, congratulations and thanks goes to Ryan Griffiths on his debut season as First team manager. You stuck it out.

A final few words from manager Ryan Griffiths to his players: