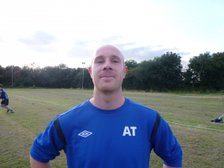 Bankers win two on the bounce

Sheffield Bankers stretched their unbeaten run to five games and picked up their first clean sheet of the season against AFC Dronfield.

With a couple of players missing this week, Tommi McCormick and Matt Taylor were brought into the starting line-up on each wing, whilst Andy Taylor returned in goal to cover for the injured Sam Blackburn.

Bankers started the brightest of the two teams; showing intent on pressing the Dronfield defence from the off. Robert Jerrison was a key driving force in this as he ran the line well. Bankers’ first chance fell to Rob; good link up play between Daniel Beech and Matt Taylor down the right hand side resulted in a cross floated in to Jerrison, but with the ball slightly behind him it was difficult to convert the header.

Another chance fell to Robert Jerrison later on as he was played through on goal. Rob rounded the keeper and looked to slot the ball into the net, but Dronfield’s defender tracked back well to block the shot. Tommi McCormick looked threatening when unleashed down the left hand side and Mauro Pistis also had a long range effort after a driving run from deep.

Dronfield had a couple of chances of their own but these were dealt with well by Bankers’ defence and stand-in keeper Andy Taylor.

With around 10 minutes left of the first half to go, Bankers took the lead through a well worked goal. Robert Jerrison stretched the defence by running into the right hand corner, and he picked out a superb cross to Daniel Beech, who struck the ball first time on the half volley into the bottom corner of the net. Great finish - that is now three goals in three games for Daniel Beech. 1-0 to Bankers.

Just before half time Bankers had another effort on goal via a Daniel Beech free kick, but the keeper saved it. Half time finished 0-1.

Bankers started the second half on the front foot once again, and could have doubled their lead within the first couple of minutes of the restart. Robert Jerrison turned his man and played a through ball for Matt Taylor to run onto, but he was unable to make contact with the ball to convert the chance.

Bankers created another chance soon after. Tommi McCormick showed good pace to cut inside from the left and went to shoot, the ball deflected up off the Dronfield centre half and into the area, Matt Taylor ran in and knocked the ball down towards Daniel Beech who had a decent first time effort with his unfavoured right foot.

As the game wore on, Dronfield started to attack more and applied pressure, but Bankers stood up well to it, with Terence Balmer and Joe Jerrison monumental in centre half. Andy Taylor also put on an impressive display, pulling off a number of crucial saves, organising his team defensively and dealing with crosses in a commanding way. Captain Mikey Russell also helped relieve the pressure by winning countless aerial battles in the centre of the park. One battle resulted in an almighty crash of heads which alerted the nearby ambulance. But releasing his inner Hulk Hogan strength, Mikey Russell returned to the field of play as if nothing had happened, although he would go onto to mention the incident countless of times after the game.

With around 25 minutes to go, Jo Robinson replaced the injured Jack Joyce at full back and shortly after his brother Lewis replaced Tommi McCormick on the left wing, with both putting in a good shift to help steer Bankers towards victory.

Although Dronfield had come back into the game, Sheffield Bankers continued to look dangerous on the counter attack. Daniel Beech thought he had been put clean through on goal but the ref decided to blow his whistle for a free kick following a handball from Dronfield’s centre half, rather than play the advantage.

Another chance fell to Bankers when Jo Robinson’s long throw landed inside the six yard box, but the chance went away as Matt Taylor and Robert Jerrison both went for the ball, unaware of each other in that split second. Lewis Robinson also broke down the right hand side late on but his effort to square it to Daniel Beech was blocked by their left back.

Dronfield had quite a few corners towards the end of the game. One coming after Andy Taylor made a superb stop at his near post. From the resulting corner, Andy had to show great reflexes once again as the ball bounced around the area and eventually was pounced upon and gathered by the keeper.
The Bankers defence also did their bit with a quick succession of blocks in the area from James Nield-Smith, Matt Taylor and Joe Jerrison towards the end of the game; with the pick of the bunch coming from Jerrison in the closing minutes.

The referee blew his whistle for full time and Bankers had seen out the game to win 1-0. Their second win in a row and first clean sheet of the season. A great battling performance all round and hotly contested football match. The referee even commented on the high quality of the game.