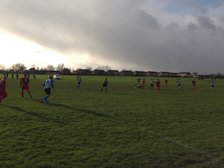 A Grim Day up North

The match started as a scrappy affair, with the windy conditions and bobbly pitch providing a barrier to either team playing sweet passing football.

The first half saw limited chances for both teams. The first chance fell to Denaby when a through ball was played to their striker; he rounded the keeper and looked to slot the ball into the empty net. However, Joe Jerrison came racing back to block the ball from crossing the line. Great clearance.

Denaby struck again around 20 minutes in and managed to score from a strike to the Bankers’ near post. Keeper Scott Dinnigan got a hand to it but could not keep it out. 1-0 to Denaby.

Bankers began to find their feet and started to press higher up the pitch; with a lot of joy coming down the left hand side. A neat passing movement resulted in a first time effort from just outside the area from Daniel Beech. The ball looked to be curling towards the top corner but the keeper made the save.

Later on Captain Mikey Russell tried an audacious Jamie Vardy-esque strike from 40 yards out. Allowing it to bounce once he struck it first time and seemed to cause panic in the keeper; who managed to flap the ball away just before it reached the goal line.

Half time came and the score remained 1-0 to Denaby.

The second half saw more chances created at both ends but it was Denaby who got the only goal of the half. An indirect free kick was awarded for a back pass and Denaby managed to strike from this opportunity. 2-0 to Denaby.

By this point, the conditions had got significantly worse; a huge black cloud appeared over the open field and snow began to whizz horizontally across the pitch.

With around half an hour to go, Sam Dean replaced the Italian Stallion Mauro Pistis in midfield. Bankers began to press high up the pitch and peg Denaby back for large portions of the second half. A couple of chances fell to Beech and Chris Tunstall, who both had efforts on goal saved by the keeper.

With around 20 minutes to go, Matt Taylor replaced Jack Joyce at right back and James Nield-Smith shortly followed to replace Jo Robinson at left back. Bankers continued to put pressure on the Denaby defence; but to no avail. Mikey Russell had an effort smash the crossbar as the keeper looked to be beaten. Chris Tunstall had another effort on goal as Matt Taylor laid the ball to him just inside the area.

As Bankers pushed higher up the pitch, Denaby managed to counter on a couple of occasions and had good chances to score. Keeper Scott Dinnigan was forced to make two one on one saves in fairly quick succession to keep Bankers’ hopes alive.

Towards the end of the match Terence Balmer found himself in Denaby’s area and had a volleyed effort saved following a cross from fan favourite Robert Jerrison.

The match came to an end and the score finished 2-0 to Denaby United. Not a great game in terms of quality, largely due to the weather conditions; but both teams can be satisfied with their battling performances. Denaby showed their ability to grind out a result in difficult conditions, which highlights why they are top of the league. On another day, a match-up between these two teams would no doubt create an entertaining game.