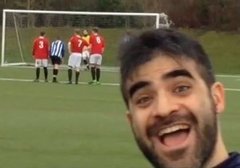 Sheffield Bankers registered their second 1-0 win in a row after a well fought victory against Kingstone United.

Absentees from the team included Jack Roe and the injured Phil Miskell. Daniel Beech returned to the starting line-up, as did Jack Joyce. Chris Tunstall started as captain for the game.

The game started at quite a high intensity. Both teams looked to press as much as possible which meant neither side had long spells on the ball. Kingstone looked to threaten early when a long ball over the top was met by their left winger, but the danger was snuffed out.

Bankers had the first real chance to take the lead when they were awarded a penalty around 20 minutes in. Fan favourite Robert Jerrison showed his athleticism when running between players with the ball from the right hand side. He skipped past the defender in the corner of the area and was taken down in the resulting challenge. Chris Tunstall stepped up to take it, hoping to score his second penalty in back to back games. However, it wasn’t meant to be this time as Tunstall’s shot went wide.

Both teams continued to press when not in possession. Kingstone proved to be a very organised team that brought many players back into their half when under pressure. Finding an opening was proving difficult for Bankers. However, they did manage create another good chance when a low ball from the right hand side was met by Jack Joyce just inside the area. He struck it low towards the corner but the ball bounced back off the post – agonisingly close.

Kingstone had an effort blocked just before half time. A decent header from their tall forward was heading goal bound, but keeper Scott Dinnigan produced a fine acrobatic save to his right hand side. The first half finished 0-0.

At half time Matt Taylor replaced Robert Jerrison on the right wing and around the hour mark Sami Eric and James Nield-Smith were replaced by Captain Mikey Russell and Mauro Pistis. Jack Joyce was moved from his midfield position to right back, proving that he is Bankers’ equivalent to James Milner (in terms of versatility, not personality – Milner is a lot more charismatic).

In the second half Bankers pressed higher and got their rewards by creating the larger number of chances between the two sides.

Daniel Beech thought he had scored when he latched onto a through ball and lofted the ball over the keeper; but the ref had ruled him offside. Shortly after Jo Robinson played a ball into Matt Taylor who had space inside the area, but again the ref blew his whistle for offside.

With Sam Dean having moved to the right wing, his pace caused a number of problems for Kingstone. A low cross from Dean managed to squirm through a couple of defenders and Matt Taylor nipped in front of his marker to get a touch on the ball, but Kingstone’s keeper came out to gather the ball before he could get a shot away.

With around 10 minutes remaining Bankers continued to look for the opening goal. Jo Robinson came close with a decent strike from around 25 yards out which forced Kingstone’s keeper into a save as he tipped it over the bar. From the resulting corner, Bankers came close to scoring as the ball was cleared off the line following a header. Terence Balmer, Joe Jerrison, Jack Joyce and Mikey Russell were all proving to be a handful for Kingstone’s defence throughout each corner.

Kingstone were defending resolutely, but were also looking dangerous on the break themselves. However, the Bankers’ defence were able to limit their chances.

Just as it looked like the game was destined for a goalless draw, Bankers finally got the goal they were desperately searching for with only a couple of minutes remaining. A towering header from Captain Mikey Russell lofted the ball over Kingstone’s defence and into the path of Daniel Beech. Beech saw the keeper was to one side of the goal and coolly side footed the ball just inside the near post. 1-0 to Bankers.

Kingstone looked to press in the closing minutes but Bankers regrouped and held on for the win. For the second game in a row, Bankers had shown great patience and resilience to snatch a 1-0 win late on in the match. A mature performance from the team once again.

Next week Bankers host Davy FC in their last home game of the season.