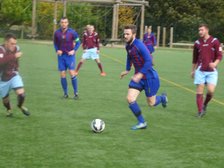 Bankers pulled off a Masters performance against Davy FC, starting off Sheffield’s sporting heroics over the weekend.

The first half was a fairly end to end affair, but with little chances created in the opening stages of the half. Bankers first created an opportunity when Matt Taylor crossed from the left, searching for fan favourite Robert Jerrison at the back post; but the ball zipped past him and the defenders.

Bankers thought they had taken the lead when Matt Taylor played in Daniel Beech, but the ref blew his whistle for offside; although it did look as though Davy’s centre half and left back were both playing him on.

Davy FC were applying pressure of their own at times, but rarely troubled goalkeeper Scott Dinnigan. It was Bankers that broke the deadlock when Robert Jerrison chipped a ball past the defence for Daniel Beech to run on to. Beech calmly lofted the ball over Davy’s keeper and into the net. 1-0 to Bankers.

With a few minutes remaining before half time Bankers had an opportunity to double their lead. Matt Taylor played a through ball from the right hand side with Robert Jerrison running across goal to meet it. Unfortunately his pace let him down and he narrowly missed it – the unbiased opinion of this reporter believes that pass deserved a goal.

Shortly after Jo Robinson had to be replaced after sustaining an ankle injury. James Nield-Smith came on to replace him at left back.

Half time arrived with the score 1-0 to Bankers. The half time team talk from the gaffers consisted of orders to go out and attack Davy’s defence and control the game.

Bankers did take control of the game throughout large periods of the second half. Daniel Beech was finding joy getting in behind the defence, but was also providing a useful link up with the attacking trio behind him. Chris Tunstall was seeing a lot more of the ball in the second half and often found the wingers either side of him. Robert Jerrison made a good run into the centre and produced a shot from around 25 yards out.

Around the hour mark Sami Eric replaced Mauro Pistis in midfield. Bankers began to press higher and higher up the pitch as the match wore on. The team won a number of corners and looked dangerous from them each time. It was from a corner that led to their second goal.

The ball had been cleared and Sami Eric won the ball just outside the area. Eric turned and played a through ball towards the left of the area to Captain Mikey Russell. Russell then played a delightful low cross towards the back post and fan favourite Robert Jerrison slid in to tap the ball into the net from close range. Great team goal. 2-0 to Bankers.

Davy began to throw more bodies up the field in order to get back into the game. A very good chance to get a goal back fell to their striker but James Nield-Smith produced a superb block to deny a goal scoring opportunity.

Bankers continued to press themselves and created more opportunities. Daniel Beech laid the ball back to the edge of the area to Matt Taylor, but his shot was blocked by the defender just outside the six yard box. Shortly after Taylor was replaced by Sam Dean.

With around 10 minutes remaining Davy FC pulled a goal back to make for an edgy closing period of the game. A blocked shot bounced back to a Davy player on the edge of the area and he fired in the rebound. 2-1.

Despite pulling a goal back, Davy’s hopes of a fight back were soon put to bed as Sam Dean latched onto a Daniel Beech through ball and slotted the ball into the bottom corner of the net to make it 3-1. And that is how the match finished.

Another good result and performance from Bankers. Having made a few changes to the starting line-up over the last three or four games, it shows the strength in depth the squad currently has as their fine run of wins continues.

Bankers travel to Millmoor on Wednesday night for their last game of the season; looking to go out with a bang.

Manager’s Man of the Match: Joe “I never get picked for MOM” Jerrison and Daniel “Goal Machine” Beech.