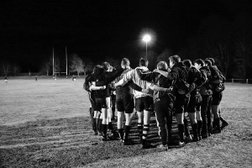 Sheffield Medicals convincingly beat Birmingham Medics to progress to the NAMS cup final for the first time in the history of the club.

The 5th of March saw Sheffield Medics convincingly beat Birmingham Medics to progress to the NAMS cup final for the first time in the history of the club.

With Chappaz booking a coach at a knock down price it was clear that something would go wrong, after a short while on the motorway the engine began to pump exhaust fumes into the bus. After two hours of inhaling the fumes Shmeds arrived at Bromsgrove RFC light headed but focused on the challenge ahead. Prior to the game we were informed by head scout James Flint that "these boys don't like it up him", worryingly Flinty has offered this insight into every game he's ever spectated, however his wise words were taken onboard #insiderknowledge.

Wise words by Coach Gabbott and a slick warm up brought us up to kick off, with the lads obviously pumped up. Sheffield flew out of the blocks, with Alex Fawdry demolishing the catcher from the kick off. Concerted early pressure lead to a penalty from the boot of Hodgy. 3-0 Sheff.

This acted as a rude awakening for the midlanders who were yet to loose a league game this season. The Birmingham side applied consistent pressure to the Sheffied defence and were duly rewarded with a penalty for an infringement at the breakdown. The Birmingham fly half slotted the penalty to bring the scores equal after 10 mins.

What followed was an intense period of attack from the visitors. Tireless tackling by Birmingham was able to keep out the Sheff boys for a while, but eventually Fawdry succeeded in getting over the whitewash. Conversion added by Hodgey. 10-3 Sheffield.

The first half carried on how it began. The forwards were dominating in the contact with strong scrummaging from Dobree and Beechy. This was complimented by well executed moves in the backs which were stewarded by FTR. The first half ended 10-3 with Sheffield knowing they had to push harder to secure the win against a tough opposition. HT: 10-3.

Knowing the first score in the second half would be vital Sheffield took up where they left off. Some perfectly weighted kicks from FTR put the boys in the right areas of the park. Birmingham attempted to use power up front and attack around the fringes, but Sheffield defended well against this with bodies flying into tackles all over the shop. Beechy showed the boys how it’s done by diving at ankles again and again.

Following a turnover by the Jindoe Sheffield began a relentless period of attack. This was to this distaste of the Birmingham number 3 who decided to take matters into his own hands and start throwing punches. For this effort he was rewarded with a yellow card and 10 minutes behind the posts. Turns out he didn't like it up him.

This brought the Birmingham forwards down to 7 which was bad news for the home side who were already struggling under the pressure applied by the Yorkshire pack. After the visitors knocked the ball on 10 metres out, Webby took the ball against the head and Sheffield drove to the Birmingham try line for Fawrdry to score his second of the day. Conversion missed. 15-3.

From the kick off Birmingham began to play in the Sheffield half and looked dangerous with Chaz Hudson at prop running some strong lines. The pressure from the home side did not worry the Shmeds who continued to send them backwards at every tackle #brickwall.

Following this Sheffield were rewarded with another penalty following another infringement at the breakdown. Hodgey added the 3 points. 18-3.

After resisting more pressure, Shef Meds began to play in the oppositions half. From a breakdown the Sheffield side rushed the Birmingham fly half who was attempting a clearance kick. JMac got lucky and managed to pull off a charge down try. Hodgey added the extras which were the nails in the coffin for the Birmingham side. 25-3.

With the final whistle came elated celebrations with Sheffield putting in arguably their best performance of the season. SMURFC now progress to the NAMS cup final vs. Southampton Medics on 15/3/14 at Moseley Rugby Club, Birmingham. The Shmeds will be joined by fellow Yorkshire side Leeds Medics and Dentists who are competing in the plate final.