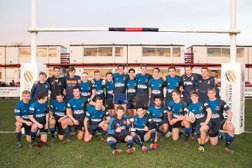 The 15th of March saw a convincing performance from Sheffield Medicals RUFC to relieve last years winners of the NAMS Cup.

The match day squad met at Bar One to be accompanied by two separate coaches full of supporters heading down to Birmingham to cheer on the Shmeds. After arriving at Billesley Common early to support Leeds Medics and Dentists in the plate final the match day squad began to get into kit and ready themselves for the challenge ahead.

Wise words by Coach Gabbott and a slick warm up brought us up to kick off, with the lads obviously pumped up. Sheffield flew out of the blocks, with Rob Conville kicking off and Jindoe demolishing the catcher.

Both teams began to utilise their skill sets and exchanged kicks which were no hassle for the Sheffield back three (including Hodgey - "the worst player Southampton have ever seen"). After a few early exchanges and some strong tackling in the centres from Flint and Mcleod, Sheffield were eventually awarded a penalty for an infringement at the breakdown. The Shmeds attempted to gain an early lead and opted to kick for goal - unfortunately it was not to be and the ball came flying back having bounced off the post.

At this period in the game the Yorkshire contingent in the crowd (Sheffield and Leeds) continued to make a tremendous amount of noise to minimal response from the poor number of Southampton supporters. It was noted by Chris Jones that one of the opposition supporters was wearing a trilby - questionable attire.

After a continued period of pressure from Sheffield, Southampton managed to turn over the ball and clear their lines. Following a dropped ball and scrambled defence, Southampton were awarded a penalty on the Sheffield 10m line. The Southampton 10, Adam Davies, stepped up and slotted it with ease: 3-0 Southampton.

Following the restart Sheffield were very much on the back foot. With the Southampton side running strong lines and with clinical work around the breakdown Sheffield were unable to keep possession for an extended amount of time. After a prolonged period of attacking the steel curtain the Southampton centre made a break and managed to offload in the tackle, allowing the number 8 to score under the posts. Conversion added by Davies, 10-0 Southampton.

It looked as if it was to be a long day at the office for the Shmeds. Following the kick off the Sheffield pack began to use their experience from Yorkshire rugby to knock holes into the Moose. Eventually the omnipresent Matty Clark managed to force a penalty at the breakdown for holding on. Whiff managed to get his hands on the ball for a quick tap and sent Piggot in to score unopposed. Conversion added by "the worst player ever". 10-7 Southampton. Game on.

Shortly after the restart the Moose were awarded another penalty, however Davies was unsuccessful this time and sent the ball wide. Man mountain and LOTY Dave Ellis also took a knock in this period and was replaced by Jonny France.

In the run up to half time the referee, Steve Johnson, made a decision which can only be described as heinous. Freshers liaison officer, James Indoe was wrongly awarded a yellow card for 'collapsing a maul'. #justiceforjindoe

Down to 14 men Sheffield struggled to offer much in attack, but did well to keep the charging Moose out of their in goal area before half time.

After an inspirational team talk from 1st team captain Ben Gabbott, Sheffield received the kick off and began to play some exciting rugby. Knowing the first score in the second half would be vital Sheffield took up where they left off. Some perfectly weighted kicks from FTR put the boys in the right areas of the park.
Sustained pressure inside the Southampton 22 led to Hodgey pressing the flair button. A clever nudge allowed Blackers to touch the ball down in the corner. Conversion missed. 12-10 Sheffield.

This seemed to act as a wakeup call to the Southampton side who had declined rapidly since their dominance in the first half. The Moose continued to attack ferociously around the fringes and made life hard for the Shmeds at the breakdown. Eventually Southampton managed to spread the ball wide and finished off a 2 on 1 with a try. Conversion added by Davies. 17-10 Southampton.

From the kick off Sheffield attempted to play running rugby but were thwarted by strong tackles from the Moose. With Conville left with minimal options he chose to clear his lines and send the ball deep into the Moose sanctuary. Chris Blackwell was first to the catcher and made an excellent one on one tackle. Shmeds piled on the pressure and managed to keep the animals on the back foot. After some strong defence, Piggott destroyed his opposite number and forced a penalty in the process. Whiffy saw the opportunity for a quick tap and used his cat-like relexes to dodge tackles and hit Jonny France on the wing to cross the line in the corner. Conversion missed, 17-17. This was to be the beginning of the end for the Moose - call the veterinarian.

What followed was an intense period of back and forth rugby with both teams taking a beating. Tireless tackling by Webby, Flinty and Dobree enabled Sheff to keep out the Southampton boys. Eventually Sheffield were awarded another penalty which was calmly slotted by Hodgey. 17-20 Sheffield.

The second half carried on how it began. The forwards were dominating in the contact with strong scrummaging from Dobree and Beechy. This was complimented by well executed moves in the backs which were stewarded by FTR. Eventually Sheffield had the feed at the scrum on the opposition's 5m line. All the practice in Yorkshire 2 came to fruition as the Shmeds gained a push over try through Matty Clark. Conversion missed. 25-17 Sheffield.

From the kick off Southampton began to play in the Sheffield half and looked dangerous. The pressure from the home side did not worry the Shmeds who continued to send them backwards at every tackle #steelcurtain.

After resisting more pressure, Shef Meds began to play in the opposition's half. Sheffield were once again awarded a penalty and the worst rugby player ever added the 3 points which were to be the nails in the Moose's coffin.

With the final whistle came elated celebrations with Sheffield putting in a strong performance to be win the NAMS cup for the first time in the history of the competition. A brilliant achievement and the squad now have full focus on maximising their potential in Yorkshire 2. Congratulations to all those involved and thank you to all those who took the time out to come and support.