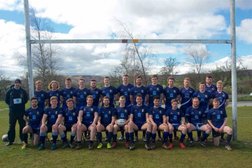 NAMs campaign starts with a win.

The 26th of October saw the Sheffield Medics entertain a visiting Liverpool side in the first NAMS game of the season. Many of you should also recognize this as the evening of the Great British Bake Off Final and I make no apologies for the number baking puns that follow (so many Choobs may try to eat this report). The conditions were crisp and dry, with the pitch not too soft and an even frosting of emerald grass under the flood lights. The team assembled was a strong one considering how many could have been tempted to stay in and watch things go in and out the oven and so the assembled spectators were quietly confident that Sheffield would rise to the occasion and produce some tasty rugby.

The match started a little frenetically, with the pace of the Liverpool line a little different to that experienced on a Saturday. Nevertheless, as you would with a piping bag Sheffield got the squeeze on at the scrum and won a scrum penalty, the first of the season by all accounts. This ended up in the corner but a bit of white line fever that those involved should probably talk to Frank about led to nothing coming of this early pressure. However, the first score came soon after this as a greased up Mike cut through the Liverpool line like a pie slice through a quiche (hot knife through butter was too obvious) and dotted down in the corner. 5-0 SHMEDs and given the direction of most of the play was probably fair.

Liverpool then began to apply the pressure and despite winning two penalties in quick succession both drifted wide of the (gas) mark. However the pressure kept coming and eventually it told as Aitchison was pinged for coming in from the side and told to take 10 minutes to cool off. SHMEDs managed to get back down the pitch, with Pigott putting in arguably sack of the match to leave the Liverpool man with a soggy bottom. Then a break from the Liverpool winger led to Coxy striding back and launching his considerable length to stop what was a certain try, Tucker then giving the Liverpool player the good news as he deposited him into touch. Aitchison then came out of the fridge and back onto the pitch for the final few minutes of the half which when the timer went off saw SHMEDs 5-0 up but not counting their muffins before they were done. Schofield’s comment perhaps summed things up best; ‘we seem to be determined to make it a game for the neutrals’.

From the off in the second half Liverpool upped the heat and another of their players burst through only to be smothered by a flying Pigott and the chance was scone. Admittedly the referee was 50m behind the play and so the tackled man’s claims he grounded the ball may not have been unfounded however all he got was a 5m scrum, leaving him a little bitter. From this Liverpool eventually worked an overlap and got over the line, 5-7. From the restart SHMEDs moved up to Gas Mark 6 and battered the Liverpool defenders. Pigott made another line break with his customary grunt but a few pairs of oven mits later and the chance went down. A penalty advantage had been played however and the lead was regained, 8-7. The SHMEDs then went up to Gas Mark 8 and another penalty was won, with the Liverpool man seeing yellow for not (bread) rolling away fast enough when Sheffield were within 5 metres, leaving them with one more than a baker’s dozen. This meant 11-7 and a previously irate Choobs was able to relax a bit.

This numerical advantage and another strong scrum led to Tevans finding Tucker who picked a good line and beat a few defenders to get Sheffield’s second try of the game and give them something of a more comfortable lead. Fresher Frank added the extras to make it 18-7 with around 10 minutes to go. Some good tactical kicking began to run the clock down and gave Hugh Harding the chance to bemoan a lack of an appropriate profile picture with the official photographer. Liverpool sensing that they were almost done, whisked the ball down field from a penalty, and the resulting line out (despite being a little wonky…) meant they were once again threatening the Sheffield line. Pigott who had been involved all game decided to take a nap on the ball and got binned (by his own admission he deserved it). This let Liverpool unscrew the lid to Sheffield’s cookie jar for one final score. This turned out to be the last action of the match, making it 18-14 to Sheffield as the egg timer hit zero.

This was not a showstopper performance from Sheffield, but they did enough to win (much to the relief of Mrs Pigott who was following the twitter feed closely). The defence was a bit too short crust at times as some strong Liverpool runners did cause cracks to appear and a few chances went down in attack that on another day might have been finished off with a flourish. That being said a mark of a good team is that you win when you don’t play your best and there is no doubt there were all the ingredients of a good side on show. Therefore although this performance was a little under-done, the icing will no doubt be applied to the cake in future fixtures.