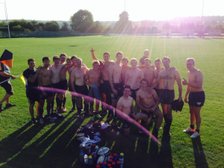 This weeks match report from our very own Thomas Pigott

And on those valiant Medics sored, to the home of West Leeds RUFC. A battle touted to be quite the epic. Battle is the most magnificent competition in which a human being can indulge. It brings out all that is best; it removes all that is base. All men are afraid in battle. The coward is the one who lets his fear overcome his sense of duty. Duty is the essence of manhood.

A brisk warm up; a kit kerfuffle that confounded all and left Shit Chat shrugging. We were ready to face what was thought to be the sternest test of our duty this year. The duty that is; too smash this league into a million pieces on our way to undefeated glory. (Thanks here to James Conville for calling his brother Rob, who managed to secure us a beautiful, even if slightly less flario kit)

Kick off from the medics was a good’un, well taken by the Leeds lad, cleared up-field after a phase or 2, and so the game began, those first few exchanges carried through with the adrenaline of oncoming war. First blood to the medics, a penalty just wide of the posts, duly slotted by 2nd row extraordinaire Tommy P. He was to have an influential game.

The next 20 carried on in a somewhat scatty manner from both teams, with neither side breaking the deadlock, or managing to convert break through’s into tries; or pressure into points. The boys in Leeds uni kit were continually being pinged at the breakdown. A mixture of some poor pod play and lack of individual enthusiasm and the referee was forced to make a decision he shouldn’t of. Pigott saw the ball at the back of the ruck, went to pick it up but was pushed in, (I think by fally slaw as he does love to have the ball) and so was deemed to be playing the ball on the ground. To the bin with 10 mins of the half left. SILLY. Not wanting to be outdone by his much better counterpart, Geordie decided to copy Pigott, and he got a yellow as well, but his was much deserved. SILLY-ER.

13 men left on the field. 5 mins left of the half. WLRUFC piled on the pressure. The boys stood incredibly strong, fronting up with huge D in all corners of the field. Unfortunately the WL wing snuck over in the corner for his first of the afternoon. He should probably of had 2, but for a tackle that will go down in the history books, more on that later. No conversion, half time 5-3 to WLRUFC. Fair.

Half time talks from Bean, Fawds, Matty “Chat” Clark and the occasional scouse snippet from Gaynor read along the lines of “continue what we’re doing boys, we’ll grind ‘em down. OH! And pigott’s back now, we’ll be good, lets try and put it out of reach before Geordie gets back on in 5 and then we start losing again!”
West Leed’s 10 sent up a gorgeous hanging kick to begin the second half, gratefully snaffled as the man soared over Smellis: the medics hardworking dogged number 6. From there West Leeds gained much momentum, and some hard punishing defence from the medics seemed to be enough to keep those marauding northerners at bay. One tackle from one player lives pretty fresh in the memory. That winger who should have had 2, in fact even after the tackle of the century, he still should have had 2 but don’t tell the ref, first movement was held up, I’ll hold on to that.

Rob’s back on, and it seems as if the momentum medics had gained was diminished. It was evident that the leeds boys thought they had it now, even with there own 6 sent off. A beautifully weighted cross-fielder was latched onto by “I’m not quicker than high tops but my hands are pretty much definitely better” and west leeds were 10-6 ahead, out doing the medics by 2 tries to 1.

With half an hour remaining, and the cries of the medics bench loud and true: “grind them down, play the phases, score some rugby football tries”; we began to tear shit up pretty much. Flinty had 2 in a performance true to the toughness of the man himself. Wiff got one even after High Tops forgot what he was doing, although to be fair it did look as though he tripped over the line. Fawds had one after Pigott passed it to him behind the line in a classic “I’m better than you but here, I’m gracious about it and I sympathise with your cause” move.

The game began to splinter, and the medics resident hard man, coach wiff began showing that those nights out rolling round with the CK crew (blickers knows) are paying off. He left the game with newly developed triskaidekaphobia, and as of Monday morning, a brace for his teeth that puts him more at home amongst the freshers; he’ll be happy about that.

West Park Leeds are welcomed to Fortress Norton next week. They should feel confident knowing that the medics leader Pigott is away on wedding duties. Freshers social after will be epic, good luck to all the new members of our fine institution!