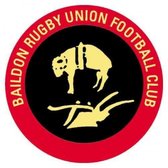 With the weather threatening to slide either way, the medics returned to the ancient settlement ground of Fortress Norton to fend off the invading force of Baildon. Unsure of the size of the encounter, the medics were ready for anything, except a match without a ref… But the warm up went ahead and lo and behold he arrived on time to allow battle to commence.

And so it is told that the match started with a kick off from the boot of James Conville; and from that point on, the defensive walls were built. Despite the solid masonry, the medics conceded a penalty in their own half. The Baildon kicker began his run up, and although it is against the rules and he wasn’t even playing, Brendan Heath charged the ball down with his eyes.

Working their way up the field, the boys in blue claimed the touchline 5m from the corner flag, caught the lineout and Fawdry scored an outrageous try off the back of a rolling maul. Conversion to come, and Joe Knight slotted it. In an episode of déjà vu, Baildon received a penalty inside the medics half, lined it up, took the kick, but it was again charged down using Señor Heath’s recently acquired powers. A maul begun from a 5m lineout trundled beyond the line, whereupon downward pressure was exerted by a certain Mr Fawdry. Déjà vu again? No. This time as the referee was about to award 5 points, he bailed on it and claimed Baildon held it up.
So on went the medics with the tryline in sight, placing a penalty kick in the corner, allowing Ali Shaw to play a beautiful lineout and place it over the line after another rolling maul resulted in a 12-0 lead. Déjà vu again? Maybe. Joe Knight lined up the kick, but he bailed on it. So no.

Edging near the tryline yet again, a couple of players, who shall remain nameless, engaged in a round of fisticuffs…but it escalated quickly with all on field players getting involved, some with a bit too much enthusiasm according to the ref. Wiff receiving a yellow card for the heinous crime of being too quick. A Baildon player was also removed from the pitch and so 14 a side rugby was born again.
With a penalty just before the end of the half, the mid game score was at 15-0.
And so began the second half where one of their players kicked it to us and the rest of their team ran towards us. Upon receiving the ball, we kicked it downfield and chased, eventually pinning them in their own half after a few massive hits from J Flint. Quick ball and lovely hands soon followed to Bobby Causer who ran a beautiful finish into the corner; again the conversion was bailed on leaving the score at 20-0.
Upon that same patch of grass 5m out from the Baildon tryline that Bobby C had so recently scorched, there was a lineout, where I’m sure there was déjà vu yet again, as a maul was set up and Ali went over for his hat-trick avoidance and the bonus point score. The score stood at 25-0.

And so the attack went on relentlessly with the medics heading towards the Baildon tryline. 30m out quick hands were called whereupon it became clear that all of Dave Ellis’ shrugs had paid off as he produced some unreal quick hands to give Bobby C a run in for the corner. But he still had work to do. So in recompense for his earlier pass to the spectators, he turned on the after burners and ramped the sidestep up to a teleport to get round 3 defenders and earn his hat-trick avoidance.

Soon after, the medics received yet another yellow for unknown reasons, with Twed bearing the brunt of it. However Baildon got one too a few minutes later as one of their players tried to pick a fight with the wrong person, I can’t quite remember who it was.

Highlights in the closing minutes included when Trellis pulled off his trademark sidestep involving stepping over the man and onto his back, and when Joey G walked into touch, over the water bottles and didn’t even need to jump to try and keep a clearing kick in play. Flinto ran in a lovely try and the final score was set at 35-0. The planning permission was passed the other week, and building work has begun on a defensive wall to protect Fortress Norton from upcoming sieges.

Good win from the medics and hopefully Baildon enjoyed their hand crafted ham sandwiches. Next week the medics face the might of Baaaaarnsley