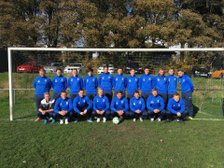 Another test as we again take on team for higher league

Saturday's game in the County FA Challenge Trophy saw us drawn against the unbeaten Beeston St Anthony's Reserves from the West Yorkshire AFL Alliance Division One.

After the first 20mins the game was even with most of the battles in the middle third of the pitch until a delightful through ball by Andrew Hawker to Joshua Hans saw him brought down by St Anthony's keeper and the referee pointed to the spot, penalty to Shelf FC. Hard to see if it was inside the box from the touchline but the referee decided penalty. Up stepped Matty Hartley to smash the penalty pass the keeper to make it 1-0 Shelf FC.

Shelf then started to dominate the ball and quickly made it 2-0 after some good work down the right hand side by Rory Senior and Calum Lewis the ball was played across the box by Joshua Hans which found Matty Hartley to fire the ball into the net. Chances came and went for Shelf FC but couldn't capitalise on them and went into the Half time break with a deserving 2-0 lead.

After the break St Anthony's started to push for a goal to get back into the game but the Shelf FC defence held firm with fantastic performances from the defence but call outs to the center-half partnership of Jonny Aaron and David Shirazi who were awesome all game and had the strikers in their pockets. Chances came and went for both teams and in the dying minutes from a St Anthony's corner they struck the bar but in truth there only real chance all game. The victory see's Shelf continue their fantastic start to the season with a record of 11 games played, 11 won in all competitions,

Shelf FC Man of the Match was Jonathan Aaron