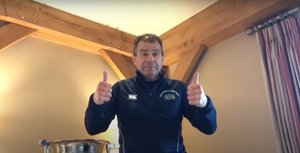 Adcock Volunteer of the month award

Click Here to watch the January 2021 Volunteer of the Month Prize Draw.

This month we recognise:

Sarah Wordsworth
Sarah joined the club in 2019 as a parent of 2 in the Under 6's and Under 10's. A rugby enthusiast herself, she came forward last September to help the Under 6's squad as a team admin. Sarah's work consists of keeping parents informed about matches and training, welcoming new players and helping parents with the registration process. All of this has in turn allowed the coaches to focus on delivering fun sessions for our youngest peacocks.

Hannah Compton
Hannah joined the club in 2016, also as a parent. Since September Hannah has been the team admin for the Under 7's and like Sarah, she provides invaluable support for the running of this age group. Hannah's task was even more daunting as she took on the task when the team did not even have coaches! Following her tracks, many more volunteers have since joined Hannah and the Under 7's now have a full compliment of admins, first aiders and coaches to look after a group of ~20 boys and girls.

Nikki Owers
Nikki is a coach in our growing girls section. Having coached girls rugby at Cambridge until recently. The pull towards Shelford was too strong to resist and Nikki is now part of our Women's Coach Development Programme.

Paul Gethin
Paul joined the club last summer as part of our Men's social sides, also known as the "345 squadron". These 3 teams are an important part of the club as they allow some of our members to enjoy their rugby both with midweek training and competitive matches on Saturdays. Originally from South Africa, and having played for the Bedford Blues, Paul runs a structured coaching programme for our players who cannot commit to the 1st and 2nd XV Men's programme, yet want to enjoy the benefits of keeping active and playing social rugby with a bit of competition.